Today’s global warming is unique among the Earth’s warm periods. The rise in average world-wide temperature (0.7°C over the past 100 years) is much faster-paced than the warming after an ice age (4 – 7°C over 5000 years).90 And the rise of carbon dioxide (CO2) in the atmosphere (80 parts per million (ppm) — up 27% — over the past 100 years) is much, much faster-paced than the rise of CO2 after an ice age (about 80 ppm in 5000 years). Since CO2 is the main greenhouse gas, and since there has not been much rise in solar radiation over the past 100 years, we are left with the greenhouse effect as the only explanation for today’s warming.9192 Scientific models show that the greenhouse effect has indeed caused today’s warming.9394 And data shows that the burning of fossil fuel has mainly caused the rise in CO2, giving another unique feature to today’s warm period: it is caused by the activity of an animal species — the human.95

For comparison, here is a look back at other warm periods:96

Each warm period has its own story, but today’s is not yet finished. The effects of today’s climate change could put heavy stress on human and other life that has gotten used to the more-or-less regular climate since the last ice age.102 As more CO2 is added to the atmosphere, the outlook for future life becomes more dire. Now, it is up to the human species to muster its social sense and clever wit, and stop the rise of CO2 in the atmosphere that it started.

91 IPCC FAQ 6.1: What Caused the Ice Ages and Other Important Climate Changes Before the Industrial Era?

… There are three fundamental ways the Earth’s radiation balance can change, thereby causing a climate change: (1) changing the incoming solar radiation (e.g., by changes in the Earth’s orbit or in the Sun itself), (2) changing the fraction of solar radiation that is reflected (this fraction is called the albedo – it can be changed, for example, by changes in cloud cover, small particles called aerosols or land cover), and (3) altering the longwave energy radiated back to space (e.g., by changes in greenhouse gas concentrations). In addition, local climate also depends on how heat is distributed by winds and ocean currents. All of these factors have played a role in past climate changes.

92 IPCC FAQ 2.1: How do Human Activities Contribute to Climate Change and How do They Compare with Natural Influences? 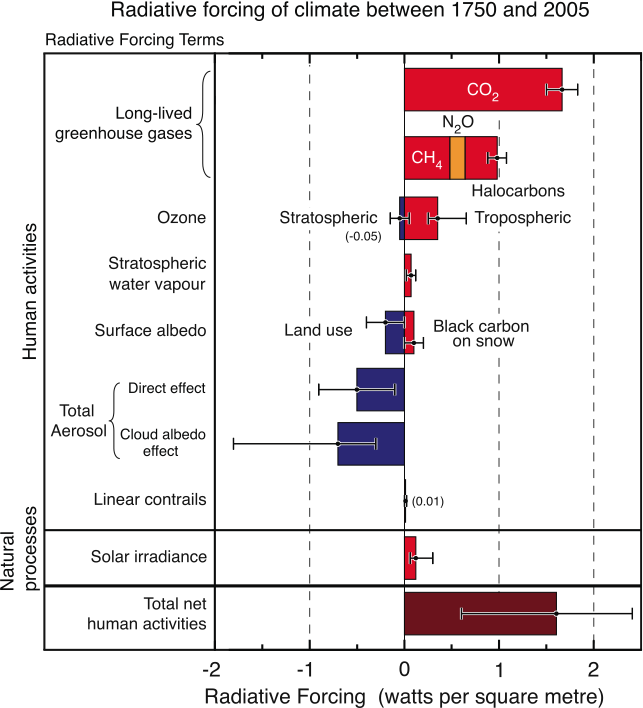 FAQ 2.1, Figure 2. Summary of the principal components of the radiative forcing of climate change. All these radiative forcings result from one or more factors that affect climate and are associated with human activities or natural processes as discussed in the text. The values represent the forcings in 2005 relative to the start of the industrial era (about 1750). Human activities cause significant changes in long-lived gases, ozone, water vapour, surface albedo, aerosols and contrails. The only increase in natural forcing of any significance between 1750 and 2005 occurred in solar irradiance. Positive forcings lead to warming of climate and negative forcings lead to a cooling. The thin black line attached to each coloured bar represents the range of uncertainty for the respective value. (Figure adapted from Figure 2.20 of this report.)

93 IPCC FAQ 8.1: How Reliable Are the Models Used to Make Projections of Future Climate Change?

There is considerable confidence that climate models provide credible quantitative estimates of future climate change, particularly at continental scales and above. This confidence comes from the foundation of the models in accepted physical principles and from their ability to reproduce observed features of current climate and past climate changes. Confidence in model estimates is higher for some climate variables (e.g., temperature) than for others (e.g., precipitation). Over several decades of development, models have consistently provided a robust and unambiguous picture of significant climate warming in response to increasing greenhouse gases.

Data show that carbon dioxide levels are rising, they are now 30% higher than at any time during at least the past 650,000 years, and likely even the past several million years. This rise is caused entirely by human activities. This is also demonstrated beyond any reasonable doubt by data – for a start, we know how much CO2 we have emitted, and the observed rise is equal to 57% of this (the rest has been taken up by ocean and biosphere). That carbon dioxide acts as a greenhouse gas, trapping longwave radiation, is also a measured fact and well-established physics since the 19th Century. …

What about a “natural” explanation for the observed global warming? There is none. Indicators and measurements of solar activity show no increasing trend over the past 60 years. The orbital cycles, which cause the ice ages, would currently tend towards cooling, if anything. There is no remotely feasible alternative explanation for the observed warming published in the scientific literature.

95 IPCC FAQ 9.2: Can the Warming of the 20th Century be Explained by Natural Variability?

… Human activities over the last 100 years, particularly the burning of fossil fuels, have caused a rapid increase in carbon dioxide and other greenhouse gases in the atmosphere. Before the industrial age, these gases had remained at near stable concentrations for thousands of years.

Interpretations of future changes in the Earth’s orbit have changed somewhat. It now seems likely (Loutre and Berger, Climatic Change, 46: (1-2) 61-90 2000) that the current interglacial, based purely on natural forcing, would last for an exceptionally long time: perhaps 50,000 years.

98 ‘The Long Thaw: How Humans are Changing the Next 100,000 Years of Earth’s Climate, David Archer Publisher’s description:

In The Long Thaw, David Archer, one of the world’s leading climatologists, predicts that if we continue to emit carbon dioxide we may eventually cancel the next ice age and raise the oceans by 50 meters.

Archer shows how just a few centuries of fossil-fuel use will cause not only a climate storm that will last a few hundred years, but dramatic climate changes that will last thousands. Carbon dioxide emitted today will be a problem for millennia. For the first time, humans have become major players in shaping the long-term climate. In fact, a planetwide thaw driven by humans has already begun. But despite the seriousness of the situation, Archer argues that it is still not too late to avert dangerous climate change–if humans can find a way to cooperate as never before.

From studying all the available data (not just ice cores), the probable sequence of events at a termination goes something like this. Some (currently unknown) process causes Antarctica and the surrounding ocean to warm. This process also causes CO2 to start rising, about 800 years later. Then CO2 further warms the whole planet, because of its heat-trapping properties. This leads to even further CO2 release. So CO2 during ice ages should be thought of as a “feedback”, much like the feedback that results from putting a microphone too near to a loudspeaker.

In other words, CO2 does not initiate the warmings, but acts as an amplifier once they are underway. From model estimates, CO2 (along with other greenhouse gases CH4 and N2O) causes about half of the full glacial-to-interglacial warming.

The Pliocene was the latest warm time in the Northern Hemisphere before the great glaciations of the Pleistocene closed in. To some extent, as we increase the atmosphere’s CO2 content, we are traveling backward in time so far as climate is concerned. Hence the Pliocene, which ended about two million years ago, has attracted a lot of attention as an analog climate for what may lie ahead. It’s not a perfect analogy, but the challenge of understanding Pliocene climate provides another test of the operation of model physics in a warm climate. …

… There was also a modelling talk by M. Vizcaino, evaluating several factors proposed to have accounted for Pliocene warmth. The ones that seem to contribute the most to conditions unfavorable for Northern Hemisphere glaciation are elevated CO2, the orbital configuration, and a permanent El Nino.

The warmest [“hothouse Earth” period] was probably the Paleocene-Eocene Thermal Maximum (PETM), which peaked about 55 million years ago. Global temperatures during this event may have warmed by 5°C to 8°C within a few thousand years, with the Arctic Ocean reaching a subtropical 23°C. Mass extinctions resulted.

The warming … was caused by the release of massive amounts of methane or CO2. It was thought to have come from the thawing of methane clathrates in deep ocean sediments, but the latest theory is that it was caused by a massive volcanic eruption that heated up coal deposits. In other words, the PETM is an example of catastrophic global warming triggered by the build-up of greenhouse gases in the atmosphere.

As global temperature climbs to 3°C above present levels – which is likely to happen before the end of this century if greenhouse emissions continue unabated – the consequences will become increasingly severe. More than a third of species face extinction. Agricultural yields will start to fall in many parts of the world. Millions of people will be at risk from coastal flooding. Heatwaves, droughts, floods and wildfires will take an ever greater toll.

There are two factors should borne in mind when thinking about the impacts. Firstly, even countries that escape the worst of the direct effects will feel the economic effects of what happens elsewhere. There may be social and political problems too, as migration increases and water becomes increasingly scarce in some regions.