Last month, Dr. Phil Wilby’s crew drew a picture of a belemnite — a Jurassic squid — with its own ink.70 “We felt … it would be the ultimate self-portrait,” Wilby said. From Dr. Wilby, and other scientists, we can tell a story of how his crew may have gotten the ancient ink:

155 million years ago, algae bloomed in a shallow sea, poisoning thousands of creatures.71 The belemnite came to feed on the dead creatures, and met the same fate. It sank into a sea floor rich in phosphorus, which within days — before the body could rot — mineralized in and around the body parts and saved the belemnite’s image.72 Somehow along the way, the ink sac came loose from the body, and the somewhat acidic water reacted with the melanin in the ink to make it solidify, and hold its full spatial shape inside the forming rock.7374 As the earth churned through the ages, the area of sea floor became the Oxford Clay in the south of Great Britain. In the 1840’s, railroad builders cut into the clay and came across the rich fossil bed. Many fine fossils were taken to London, where they were shattered by bombing in World War II.72 Through the years, with overgrowth and flooding, the location of the fossil bed became lost to scientists and the public — until Dr. Wilby’s crew went looking for it. They drilled here and there around Christian Malford, until they pulled up a core sample with a fossil.70 Over ten days, they gathered many fossils, and cracked open one rock to find the belemnite’s ink sac.75 The scientists took a piece of the solidified ink and mixed it with an ammonia solution to liquefy it for the “ultimate self-portrait”.

Nearly all animal fossils are rock impressions of the slower-to-rot hard body parts, like bone and shell, and there are only a few fossil beds in the world with impressions of soft body parts. And it is rarer still to find fossil original material — like cephalapod ink — from an organism. “It’s absolutely incredible to find something like this,” said Dr. Wilby — and the story made quite a stir. But such a story also made a stir in the nineteenth century, as was noted in 1884 in The standard natural history:73

The ink is not readily decomposed; on the contrary it is occasionally found fossil in the rocks along with the remains of the animal which produced it. So well has it been preserved that in one celebrated instance a naturalist drew the portrait of a fossil squid with the sepia derived from its fossil, but not fossilized ink-bag. 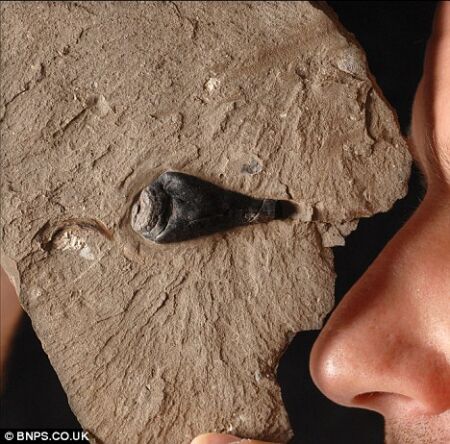 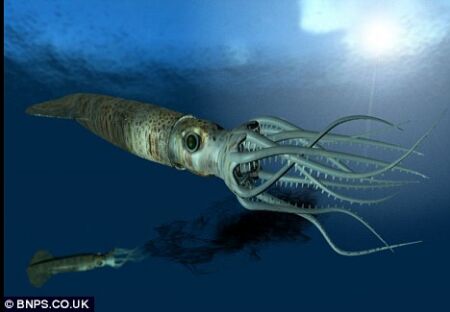 Artist’s conception of belemnites on the prowl — BNPS 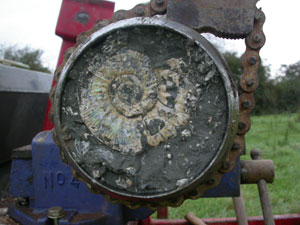 Thanks, Groznij — that’s exactly what I aim for.

EEK! Now that’s a nightmare creature if ever I saw one.

But isn’t it kind of cute with those big eyes?

Now, they’re talking the possibility of Fossilized soft tissue’s…, I’m certain I got something too, and kinda like to share with those involved wth this Medussa-fossil finders, images of my material/s.