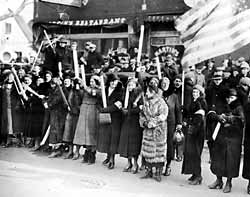 In 1936 & ‘37, workers sat down in Chevrolet plants in Flint, Michigan, and fought to stay there for 44 days, until they won the right to have their union bargain for them.60 Soon after that union victory, a wave of sit-downs swept the country and union rolls swelled. The next year, Congress set the standard of a 40-hour work week with time-and-a-half for overtime. By 1947, one-third of U.S. workers belonged to a union, and a strong middle class was rising.61 That trend went on till the early 1970’s, when both union membership and wages began to fall.6263

For a terse telling of the Flint sit-down strike story, click this link: Flint Workers Sat Down and U.S. Middle Class Rose Up.

60 Flint Workers Sat Down and U.S. Middle Class Rose Up 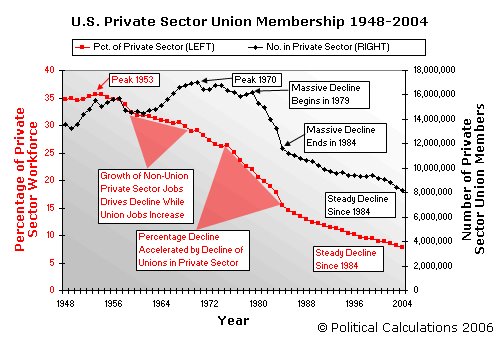 The income line since 1973 is roughly flat, but should actually be going down, because the Consumer Price Index has understated inflation since the early 1980’s. (See the next note.) — QH

Update: The Bureau of Labor Statistics answers the claims from the next note that it has understated inflation.

The CPI was designed to help businesses, individuals and the government adjust their financial planning and considerations for the impact of inflation. The CPI worked reasonably well for those purposes into the early-1980s. In recent decades, however, the reporting system increasingly succumbed to pressures from miscreant politicians, who were and are intent upon stealing income from social security recipients, without ever taking the issue of reduced entitlement payments before the public or Congress for approval.

In particular, changes made in CPI methodology during the Clinton Administration understated inflation significantly, and, through a cumulative effect with earlier changes that began in the late-Carter and early Reagan Administrations have reduced current social security payments by roughly half from where they would have been otherwise. …

In the early 1990s, press reports began surfacing as to how the CPI really was significantly overstating inflation. If only the CPI inflation rate could be reduced, it was argued, then entitlements, such as social security, would not increase as much each year, and that would help to bring the budget deficit under control. Behind this movement were financial luminaries Michael Boskin, then chief economist to the first Bush Administration, and Alan Greenspan, Chairman of the Board of Governors of the Federal Reserve System.

Up until the Boskin/Greenspan agendum surfaced, the CPI was measured using the costs of a fixed basket of goods, a fairly simple and straightforward concept. The identical basket of goods would be priced at prevailing market costs for each period, and the period-to-period change in the cost of that market basket represented the rate of inflation in terms of maintaining a constant standard of living.

The Boskin/Greenspan argument was that when steak got too expensive, the consumer would substitute hamburger for the steak, and that the inflation measure should reflect the costs tied to buying hamburger versus steak, instead of steak versus steak

Aside from the changed weighting, the average person also tends to sense higher inflation than is reported by the BLS, because of hedonics, as in hedonism. Hedonics adjusts the prices of goods for the increased pleasure the consumer derives from them. That new washing machine you bought did not cost you 20% more than it would have cost you last year, because you got an offsetting 20% increase in the pleasure you derive from pushing its new electronic control buttons instead of turning that old noisy dial, according to the BLS.