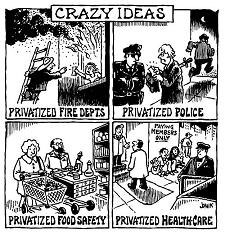 (Analysis.) Since the Democratic leadership has ignored the “Medicare for All” bill and has instead opted to keep for-profit companies in the basic medical insurance business, though in competition with a non-profit public option, those companies have focused on scuttling that public option.3031 The companies complain that, as a recent ad put it, “tens of millions will lose their current insurance, and wind up on the government health plan.”32 But were that to happen, it would be by choice. A company would choose to pay into the “insurance exchange” pool, rather than go through another cycle of shopping for a group plan.33 A worker would then choose the government plan over all of the private plans on the insurance exchange menu. So when the insurance companies make that complaint, they also make an admission: that many millions would like the public option better than any of theirs.

‘119 Million Americans Must Be Wrong’ By Robert Parry, Consortiumnews.com, June 5, 2009

The silence in the House of Representatives around single-payer healthcare and H.R. 676 will end this Wednesday. Rep. Anthony Weiner, (D-NY09) … will move to amend the current bill. His proposal is essentially to replace H.R. 3200 with H.R. 676—single payer Medicare for All.

Your logic is assailable. The worker would not be in a position to make a decent choice under the Obama plan because the Obama plan (OK, I realize Obama doesn’t have a plan, but under the House plan…) the individual worker is at a disadvantage. He cannot 1. receive a tax credit for the cost of his health insurance, 2. He is limited in choice to plans approved within his state; he cannot buy across state lines, and 3. He is in a take it or leave it position… he cannot opt out of items in the plan that he does not want and that may add greatly to its cost. In other words he cannot purchase the features and only the features he needs.

If workers could purchase insurance across state lines and receive a tax credit for its cost, they would have many more attractive options… and if tort reform were introduced to reduce the cost of defensive medicine and malpractice insurance, they’d very likely be able to find affordable and quite adequate insurance to meet their differing situations.

If instead a worker is thrown into a public system, it’s catch as catch can, and as a public plan is tagged at a $1.3 trillion cost (White House figures) added to an already existing deficit of $7.1 trillion (CBO figures), there’s not going to be much to catch.

I think a worker would have a decent choice because all the plans in the insurance exchange would have to meet a minimum standard of coverage. I don’t think we need a lot of choices in insurance anyway — we just need to be covered for medical services when we need them.

Health care is a human right and our system of for-profit insurance has left millions without it, and is the major cause of bankruptcy. I think it’s clear that we need major reform.

Health care is one of the best things for us to spend money on — a healthier population makes a for stronger nation. As for getting best value for the money — the cost of the insurance exchange-type system would be much less with a public option than with only private options (CBO). (The least costly system would be Medicare-for-all, but that’s off the table.) I think that without the public option, insurance companies would happily continue setting prices too high and ever-higher.