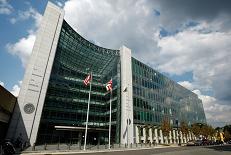 “It was like someone poured molasses on the enforcement division,” said one manager about the Bush II Securities and Exchange Commission (SEC) during the chairmanship of Christopher Cox.20 As financial fraud raged on Wall Street, Cox’s management slowed financial law enforcement at every stage of a case.212223 To open a case, an investigator had to wait, sometimes for months, for the five-person (Republican majority) commission to review and approve it. To research a case, an investigator had to deal with lousy support facilities. For example, the old, patchwork data system often forced an investigator to go outside the agency for real-time trading information. And the lack of administrative help left an investigator to spend hours a day on tasks such as scanning documents and making ones own travel arrangements. To bring a case to court (an enforcement action), an investigator had to get it through eight levels of review before placing it before the commission for approval. Some cases were dropped during this review process because they had become so old. To settle a case where the corporate culprit would pay a penalty, again the investigator had to send it to the commission, which would often slash or wipe out the fine. In one case, the commission set the penalty below that which the company itself had proposed, leaving the investigator to go back to the company to explain the lower amount. Seeing one’s work undercut at the final stage, swayed investigators away from taking up difficult cases of big financial fraud, and towards easier cases, such as small Ponzi schemes and insider trading. For example, cases of naked short selling — an illegal practice rife for big fraud — were not pursued, with 5000 complaints over 15 months resulting in zero enforcement actions.24 Under these conditions investigators left the agency, further slowing enforcement. So here we see one way that the pro-corporate Bush regime fought corporate regulation: by hindering civil servants from doing the job.

Approval of the enforcement division’s requests to initiate investigations, which was an expeditious process under former chairman Donaldson, turned into a logjam, as the commission closely scrutinized each one.

Since Cox took office in 2005, the staff count in the [enforcement] division has dropped 9 percent, to 1,124 people this year.

Demoralized, key enforcement staffers started heading out the door. Veteran S.E.C. lawyer James Coffman left in 2007 after he was passed over for a promotion. He says that Thomsen told him he didn’t get the job because he was viewed as “too tough.” Thomsen, noting that toughness is one of the qualities necessary for an enforcement job, dismissed the notion that anyone would be denied a promotion for being “too tough.”

Besides pulling back on enforcement, Cox also cut back on the S.E.C.’s new risk-assessment office, created under Donaldson to help the agency do a better job of anticipating financial upheavals. After the head of that office left, Cox didn’t replace him for nearly two years. …

Also, under Cox, the commission loosened a key limit on short-selling in 2007, scrapping what’s known as the uptick rule, which is meant to forestall plunges in share value by allowing short-selling only when a stock is rising. …

… the present financial crisis has many fathers. The failure to pass any meaningful legislation before 2007 allowed unscrupulous actors to gorge themselves at the public’s expense. Unregulated mortgage brokers sold subprime loans including the now infamous NINA (No Income No Assets). Major financial institutions packaged bad mortgages into securities and sold them as low-risk investments. Rating agencies gave stellar grades to toxic assets while being paid by the companies who stood to benefit from their actions. Insurance companies like AIG issued Credit Default Swaps which magically turned toxic assets into gold.

… a number of investigative attorneys and others told us that the policies, as applied, also have discouraged pursuit of more complicated cases, those based on novel legal reasoning, or those with industrywide implications, in favor of those seen as more routine or more likely to win Commission approval. For example, one attorney said there has been relatively more focus on modest cases like small Ponzi schemes, insider trading, and day trading, because such cases were thought to stand a better chance of winning Commission approval, compared to more difficult and time-consuming cases like financial fraud. Likewise, one Enforcement manager said that the Commission signaled that it did not favor cases involving industrywide practices.

… the number of investigative attorneys has decreased 11.5 percent over fiscal years 2004 through 2008.

Investigative attorneys with whom we spoke noted that an action memorandum can be subject to review and revision numerous times as it moves through this process. …

Some attorneys estimated that they spend as much as a third to 40 percent of their time on the internal review process, thus making it harder to meet the division’s emphasis on bringing cases on a timely basis. A number of attorneys told us that the effect of the intensive review process is to create a culture of risk aversion, an atmosphere of fear or insecurity, or incentives to drop cases or narrow their scope. They provided several personal examples. In one instance, an attorney closed a case rather than go through a review with another division. … In two other cases, charges were dropped or reduced because the matters had taken so long that people were unable to recall earlier considerations of evidence. … [I]n another case, staff prepared multiple drafts of a Wells memo over 3 years before finally closing the case because it was so old. Finally, one investigative attorney told us that a company under investigation offered to pay whatever penalty amount Enforcement asked; 5 months later, the matter still remained open, with an action memorandum in its tenth draft.

Given that Goldman Sachs runs the SEC, the only way to stop naked shorting is to abolish all shorting, ie to destroy the mechanism used by naked shorters. Vote for this now or vote for this later after much more damage is done.
More info at above website or petition at
http://www.petitiononline.com/shortNOT/petition.html

Bish II was the president who created this crisis. The crisis will not cause any problems to the business men, corporations and companies. The problem is for the customers and employees.