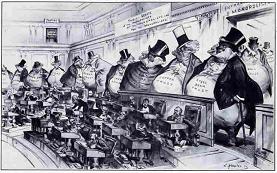 The debate on a U.S. national health insurance bill has ranged over three main plans: at one end, the single-payer system most favored by the people; at the other end, the all-private system favored by insurance companies; and in the middle, the public option among private options, favored by the majority Democratic leadership.x10 Since that leadership barred the single-payer plan from Congressional committees working on the bill, insurance companies have lowered their sights on the public option. At the first Senate committee hearing, insurance company agent Karen Ignagni offered to give up charging women more for medical insurance than men, as a concession towards killing the public option.x11 But Sen. John Kerry (D-MA) did not see that as a worthy bargaining chip. “The disparity between women and men in the individual marketplace is just plain wrong and it has to change,” he said. And before the day was out, Kerry put in a bill to ban that practice.x12x13 While that one try did not work out for the insurance companies, it still serves to show a contrast in bargaining styles. At one end, the people’s supposed representatives open with a position that has already ceded half the ground, while at the other end, the insurance companies see even a small concession as a bargaining chip.