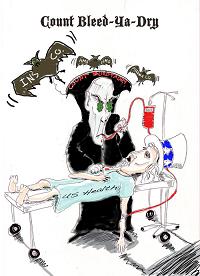 As the U.S. Congress works on a national health care bill, people have lined-up behind three main proposals. The one most favored by citizens and doctors — and many Democratic lawmakers — is the single-payer system, which would improve and extend Medicare to all persons.x1 With this system everyone chooses one’s own doctors, and no one has to shop for health insurance. This type of system has been proven to work well in many other developed countries.x2 But both Congressional committees working on the national health care bill have taken single-payer off the table, saying that moving to it from today’s huge for-profit insurance system would be “disruptive”.x3 The second proposal, favored by much of the national Democratic leadership, is the public option, where a person would pick one from a menu of several insurance company plans and a non-profit government insurance plan.x5 Like single-payer, the public option would be free of the huge costs in marketing, executive pay and profits of insurance company plans. But, to keep the public option viable, lawmakers would have to tool the system to guard against insurance companies cherry-picking the healthiest persons. To get the public option passed, proponents might have to deal with renegade Democrats sympathetic to insurance company gripes of not being able to compete.x6 The third proposal, favored by insurance companies, and those Republican lawmakers who favor any proposal at all, keeps an all-private insurance system, which would have some new regulation while requiring all persons to buy insurance.x7 This type of system was adopted three years ago in Massachusetts, but has failed to control costs and provide health care to all.x8 Still, the millions of dollars the insurance business has put into lobbying and lawmakers’ campaign chests might sway Congress to choose this system.x9 So, while it appears that corporate pull has yanked single-payer off the table, it remains to be seen if the people have enough pull in Congress to at least get a viable public option.

More than one half of the respondents from every medical specialty supported national health insurance legislation, with the exception of respondents in surgical subspecialties, anesthesiologists, and radiologists. Current overall support (59%) increased by 10 percentage points since 2002 (49%). Support increased in every subspecialty since 2002, with the exception of pediatric subspecialists, who were highly supportive in both surveys.

Title: To provide for comprehensive health insurance coverage for all United States residents, improved health care delivery, and for other purposes. (This is the single-payer bill in the House; it has 75 cosponsers.)

REP. JIM McDERMOTT: Basically, a single-payer system, which is what every industrialized country in the world, except the United States, has adopted, is a system in which you guarantee a set of benefits for every citizen of the country. No matter how much money, where they live, what color they are, what ethnicity they are, whatever, everybody is entitled to the same generous benefit package. And that’s true in France, and it’s true in Germany, and it’s true all over the place. The French, for half the money that we spend, are getting, by the World Health Organization, the best healthcare in the world.

Now, the second thing that you have to have besides a generous benefit package is a single-payer system. And you can put the money together through the government, or there are a lot of different ways it’s done in all the countries of the world, but when a patient goes into a hospital in Canada, they hand a card in for the national plan, and that’s the end of it. And you are not threatened with bankruptcy in Canada, Britain, Germany, France, Finland, Norway, Sweden, Japan, Italy, Spain. None of these countries can a citizen be bankrupted by their illness. But it is the leading cause of bankruptcy in the United States, because we have put the emphasis on individuals doing it.

Sen. Max Baucus (D-Mont.), chair of the Senate Finance Committee, has stated on multiple occasions that single payer is “off the table” of health reform.

‘Proposal would require all to have health coverage’ By RICARDO ALONSO–ZALDIVAR and ERICA WERNER, Associated Press, 2009-05-14

The summary of the House proposal says one of its main goals is to “minimize disruption” for people who already have coverage by allowing them to keep their coverage. All Americans would be protected by an annual limit on out-of-pocket costs, a safeguard already in the best private plans.

Nelson’s problem, he told CQ, is that the public plan would be too attractive and would hurt the private insurance plans. “At the end of the day, the public plan wins the game,” Nelson said. Including a public option in a health plan, he said, was a “deal breaker.”

As he so often does, Nelson said, according to CQ, that he planned to form a “coalition of like-minded centrists opposed to the creation of a public plan, as a counterweight to Democrats pushing for it.”

The major fault line that is emerging between Republicans and Democrats is over the creation of a new government-run plan modeled after Medicare that would be offered alongside private insurance plans on a government-run and regulated national insurance exchange. …

[Republican Senators] Enzi, along with Grassley and Hatch, have all come out strongly opposed to a government-run plan, meaning that if Democrats go ahead with it, bipartisan reform will fall by the wayside.

Health insurers and drug makers have showered members of the 111th Congress with millions in campaign contributions over the last four years, with a special focus on leaders who will play major roles in shaping health-care legislation, according to a study to be released tomorrow.

Thanks for posting about medical insurance. I watched the Senate Finance Committee Hearing last week. Of course, before the hearing began the nurses/doctors calling out for single payer were removed and arrested, again. Of course Senator Baucus mentioned that he “respected all the opinions”.
Of course the panel was stacked with Big Insurance and Big Pharma demanding over and over that if Congress includes a public component to the health care reform bill they “need to ensure a level playing field” for the private plans.
Later I looked up the salary of the Secretary of HHS which manages Medicare–among all the other HHS entities (annual salary=$172K) In 2005, the CEO Of United Healthcare was given $26 million. One of the panelists at that hearing was listed as formerly with GHWBush and Clinton administrations–they didn’t tell us she currently is a Director for UHC. I appreciate your blog. Thanks. Susan Craze

Susan – Thanks for the comment and additional info. I saw part of the second hearing where Baucus began by asking the gallery to show respect by not speaking out. But had Baucus respected the request of single-payer proponents to seat just one person — one person to speak for the people’s favorite option — at the hearing table, they would not have been driven to speak from the gallery. – Quinn

(Please excuse my anonymity. Like many people, my relationship with the health insurance industry is such that I cannot be publicly adversarial without fear of repercussion.)

I received an Email from the Democratic National Committee this week, announcing their plan to astroturf their health insurance proposal as being somehow populist. I thought I might share my response:

To: David Plouffe, BarackObama.com
Subject: Re: June 6th: It all begins

The unwillingness of the administration and the congress to permit discussion of a single-payer system is shameful. Ultimately, no matter how you dress it up in “grass roots” propaganda the system that emerges will be dictated by the barons of the health insurance industry and not by the citizenry of the United States.

The campaign you propose is a cheap attempt to paint the discussion as populist, when it is in fact nothing of the kind. If you want to win our support for your healthcare initiatives, try listening to the people before trying to tell us what we think.