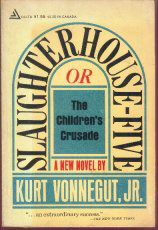 In their latter years, Kurt Vonnegut (1922-2007), and some of his fellow famous authors, each showed, I think, something of his outlook on life with a little story or a quip. For instance, Vonnegut told about an uncle who often asked a certain rhetorical question:

One thing which Uncle Alex found objectionable about human beings was that they seldom took time out to notice when they were happy. He himself did his best to acknowledge it when times were sweet. We could be drinking lemonade in the shade of an apple tree in the summertime, and he would interrupt the conversation to say, “If this isn’t nice, what is?“

Several years ago, an interviewer asked Vonnegut to recount the story where he told his wife he was going out to buy an envelope:

[S]he says … why don’t you go online and buy a hundred envelopes and put them in the closet? And so I pretend not to hear her. And go out to get an envelope because I’m going to have a hell of a good time in the process of buying one envelope.

I meet a lot of people. And, see some great looking babes. And a fire engine goes by. And I give them the thumbs up. And, and ask a woman what kind of dog that is. And, and I don’t know. The moral of the story is, is we’re here on Earth to fart around.

We were at a party thrown by a multi-billionaire out on Long Island, and I said, “Joe, how does it make you feel to realize that only yesterday our host probably made more money than Catch-22, one of the most popular books of all time, has grossed world-wide over the past forty years?”

Joe said to me, “I have something he can never have.”

And he said, “The knowledge that I’ve got enough.“

Vonnegut followed another famous author, Isaac Asimov (1920-1992), as the honorary president of the American Humanist Association. Asimov wrote hundreds of books covering nine of the ten Dewey Decimal categories. Though he preferred writing non-fiction, Asimov is best known for writing science fiction, such as the epic Foundation Trilogy. One time an interviewer asked him about his autobiography:

Southwest Airlines Magazine: I understand that at one time you said that you would let your work serve as your biography, and yet In Memory, Yet Green, your autobiography, has just come out. Why did you change your mind?

Asimov: Well, my 200th book was coming up and Doubleday wanted something they could plug, so they said they wanted an autobiography. I tried to resist, but they overcame me.

SWA: How long did it take to complete?

Asimov: Ten months. I started on March 9, 1977, and I finished on December 31, 1977 because I promised I would have it finished by the end of the year. It was rough going, too. The book is over 640,000 words long, which is more than three times as long as The Foundation Trilogy.

SWA: Have you really done that much?

Asimov: In my life? I’ve done nothing in my life. You would be surprised how shrewdly I had to write it to obscure that fact.

Vonnegut and a fellow famous author, Studs Terkel (1912-2008), each supported the scrappy, pro-democracy newsmagazine, In These Times. Terkel wrote books, such as Working and Hard Times, consisting of his interviews with common Americans, and constantly fought for them, and against ignorance of their history. He told a little story that occurred one day in his Chicago neighborhood:

You know I walk to the bus. Bus number 146. They know me in the neighborhood. They know I’m a writer. They know me as the old guy who’s garrulous. I talk to myself. [Laughs.]

So one day there’s this one couple, they ignore me completely. So my ego is hurt. And I say, “The bus is late.” And I say, to make conversation, “Labor Day’s coming up.” And the man just turns and looks at me — Brooks Brothers, under his arm, the latest Wall Street Journal. And she’s a beauty. Neiman Marcus, Bloomingdale’s. She’s got Vanity Fair in her hand. And he turns, looks at me, and says, “We despise unions.” And then he turns away.

He says, “Eight,” reflexively. I said, “How come you don’t work 18 hours a day? Four guys got hanged for you. Did you know that?”

Now I’ve got him pinned against the mailbox. He can’t get away. “So how many weeks do you work?” No bus yet.

So finally they get onto the bus, and she looks out the window, and he says, “Is that guy nuts?” And that was the last I saw of them. This is Uptown — the haves and have-nots. I’ll bet they live in a condominium. Maybe the 15th floor.

In These Times: What do you want your tombstone to say Studs?

Terkel: On my tombstone? Because of my curiosity, my tombstone is very simple: “Curiosity could not kill this cat.“ That’s it. And I think we’ve come to the end of the course. For me, I think so.

Terkel: No. You sound like my publisher. That’s it!

26 Encyclopedia of Chicago — Haymarket and May Day

On May 1, 1886, Chicago unionists, reformers, socialists, anarchists, and ordinary workers combined to make the city the center of the national movement for an eight-hour day. …

At the McCormick reaper plant, a long-simmering strike erupted in violence on May 3, and police fired at strikers, killing at least two. Anarchists called a protest meeting at the West Randolph Street Haymarket, advertising it in inflammatory leaflets, one of which called for “Revenge!”

The crowd gathered on the evening of May 4 on Des Plaines Street, just north of Randolph, was peaceful, and Mayor Carter H. Harrison, who attended, instructed police not to disturb the meeting. But when one speaker urged the dwindling crowd to “throttle” the law, 176 officers under Inspector John Bonfield marched to the meeting and ordered it to disperse.

Then someone hurled a bomb at the police, killing one officer instantly. Police drew guns, firing wildly. Sixty officers were injured, and eight died; an undetermined number of the crowd were killed or wounded.

Police arrested hundreds of people, but never determined the identity of the bomb thrower. Amidst public clamor for revenge, however, eight anarchists, including prominent speakers and writers, were tried for murder. The partisan Judge Joseph E. Gary conducted the trial, and all 12 jurors acknowledged prejudice against the defendants. Lacking credible evidence that the defendants threw the bomb or organized the bomb throwing, prosecutors focused on their writings and speeches. The jury, instructed to adopt a conspiracy theory without legal precedent, convicted all eight. Seven were sentenced to death. The trial is now considered one of the worst miscarriages of justice in American history.

Many Americans were outraged at the verdicts, but legal appeals failed. Two death sentences were commuted, but on November 11, 1887, four defendants were hanged in the Cook County jail; one committed suicide. Hundreds of thousands turned out for the funeral procession of the five dead men. In 1893, Governor John Peter Altgeld granted the three imprisoned defendants absolute pardon, citing the lack of evidence against them and the unfairness of the trial.

Buddha said it is one’s moral responsibility to be happy. He also said one should try to be useful. I think the idea is you must be happy in order to achieve maximum usefulness. This must be done while you are still alive. You don’t owe it to yourself, you owe it to everyone else.

I think it was in In These Times that Vonnegut said he thought he should sue R.J. Reynolds for false advertising because smoking Pall Malls hadn’t killed him yet.

I’ve learned from a lot of famous people and deep thinkers that enjoying your time is precious.

Isaac treated his writing as a profession. He also took time to enjoy himself while he did it.

“The most exciting phrase to hear in science, the one that heralds new discoveries, is not “Eureka” but “That’s funny…””