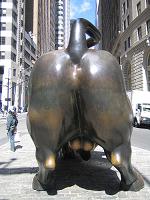 (Expletives not deleted.) After his stint on Wall Street, Michael Lewis wrote Liar’s Poker, a famous book that gave an inside story of the high-rolling Wall Street of the 80’s, with its exorbitant salaries and careless handling of investors’ money. In a recent article, Lewis wrote:

In the two decades since then, I had been waiting for the end of Wall Street. The outrageous bonuses, the slender returns to shareholders, the never-ending scandals, the bursting of the internet bubble, …: Over and over again, the big Wall Street investment banks would be, in some narrow way, discredited. Yet they just kept on growing, along with the sums of money that they doled out to 26-year-olds to perform tasks of no obvious social utility. …

In the article, Lewis tells another inside story — this time of the Wall Street of the 2000’s, and the collapse of its investment banks. He looked for persons who were right, who put their money on the coming crash — and he found Steve Eisman, a money manger at the hedge fund FrontPoint Partners. Eisman explained the origin of his negative outlook:

“You have to understand, I did subprime [mortgages] first. I lived with the worst first. These guys lied to infinity. What I learned from that experience was that Wall Street didn’t give a shit what it sold.”

“What Lippman did, to his credit, was he came around several times to me and said, ‘Short this market,’” Eisman says. “In my entire life, I never saw a sell-side guy come in and say, ‘Short my market.’”

Lippman was selling a newly-hot product of the Wall Street investment banks — the credit default swap, where you could bet that a mortgage-backed bond would fail without ever owning the bond. So there was no real limit to how much money could be bet that way. Eisman researched to find companies making the lousiest subprime loans, and bought credit default swaps on their BBB-rated (riskiest) mortgage-backed bonds. An example of the companies he found was Long Beach Financial (owned by the now-bankrupt Washington Mutual), which wrote house mortgages like this: $720,000 with no down payment to a Mexican strawberry picker, who spoke no English and made just $14,000 a year. One reason lenders made such risky loans was that Wall Street investment banks would bundle them up into bonds, run the bonds by a rating agency and get most of the bundle rated AAA (least risky) instead of BBB.

“I didn’t understand how they were turning all this garbage into gold,” [Eisman] says. He brought some of the bond people from Goldman Sachs, Lehman Brothers, and UBS over for a visit. “We always asked the same question,” says Eisman. “Where are the rating agencies in all of this? And I’d always get the same reaction. It was a smirk.”

In June 2007, the C.E.O. of Moody’s, the most renown bond rating company, invited Eisman and his crew for a visit:

By then, Eisman was so certain that the world had been turned upside down that he just assumed this guy must know it too. “But we’re sitting there,” [Eisman’s colleague Vincent] Daniel recalls, “and he says to us, like he actually means it, ‘I truly believe that our rating will prove accurate.’ And Steve shoots up in his chair and asks, ‘What did you just say?’ as if the guy had just uttered the most preposterous statement in the history of finance. He repeated it. And Eisman just laughed at him.”

Wall Street banks further bundled up the BBB slices of mortgage-backed bonds into a C.D.O. (collateralized debt obligation), and again got a rating agency to rate most of that bundle AAA instead of BBB. The banks then sold those C.D.O.‘s to pension fund managers and insurance companies that were only allowed to invest in highly-rated bonds. Eisman said:

“I cannot fucking believe this is allowed” — I must have said that a thousand times in the past two years.

At a subprime industry conference, Eisman dined with a manager of C.D.O.’s backed by BBB mortgage-backed bonds. Eisman knew that current mortgage default rates were enough to wipe out the manager’s portfolio.

“God, you must be having a hard time,” Eisman told his dinner companion.

After taking a fee, he passed them on to other investors. His job was to be the C.D.O. “expert,” but he actually didn’t spend any time at all thinking about what was in the C.D.O.’s. “He managed the C.D.O.’s,” says Eisman, “but managed what? I was just appalled. People would pay up to have someone manage their C.D.O.’s—as if this moron was helping you. I thought, You prick, you don’t give a fuck about the investors in this thing.”

… “Then he said something that blew my mind,” Eisman tells me. “He says, ‘I love guys like you who short my market. Without you, I don’t have anything to buy.’”

Then Eisman understood why Deutsche Bank and Goldman Sachs were so eager to sell him credit default swaps — the banks were taking Eisman’s bet against a mortgage, and using it to create another bond just like the mortgage-backed bond, except that it was backed not by the mortgage, but by the bet.

… “They weren’t satisfied getting lots of unqualified borrowers to borrow money to buy a house they couldn’t afford,” Eisman says. “They were creating them out of whole cloth. One hundred times over! That’s why the losses are so much greater than the loans. But that’s when I realized they needed us to keep the machine running. I was like, “This is allowed?”

Then Eisman got into shorting the rating agencies whose lush C.D.O. rating business was about to end, and big Wall Street banks, like Lehman Brothers, that sold lousy C.D.O.‘s.

“The thing we couldn’t figure out is: It’s so obvious. Why hasn’t everyone else figured out that the machine is done?”

In September 2008 Lehman Brothers and Washington Mutual failed, and the financial markets crashed. Eisman’s crew at FrontPoint was making lots of money from their short positions, but they weren’t popping champagne.

… “Look,” Eisman said. “I’m short. I don’t want the country to go into a depression. I just want it to fucking deleverage.” He had tried a thousand times in a thousand ways to explain how screwed up the business was, and no one wanted to hear it. “That Wall Street has gone down because of this is justice,” he says. “They fucked people. They built a castle to rip people off. Not once in all these years have I come across a person inside a big Wall Street firm who was having a crisis of conscience.”

Eisman summed-up his crew’s part in the crash:

“It was like feeding the monster,” Eisman says of the market for subprime bonds. “We fed the monster until it blew up.”

The End by Michael Lewis: Read the full story.

What Lewis does not give sufficient credibility to is executive hubris. Whether it is Prince, O\’Neale,(Merrill) Fuld (Lehman), Goodwin, (RBS) Ospel, (UBS) or any of the other failed CEO\’s, they all suffered from executive hubris. Read the following: