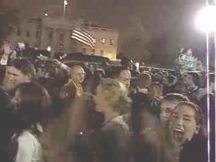 On the cold, rainy inauguration day of 2001, angry crowds lined the parade route to jeer the new president, who had gained the office by the Supreme Court quashing a vote count. “Hail to the thief!” yelled the crowd, and, “Oh, no! Gore’s ahead, better call my brother Jeb.” But the parade ended quickly when an egg hit Bush’s limousine, which then zipped off to the White House. So began the Bush regime’s eight year run of lies, cronyism, criminality, neglect, needless war and war profiteering. But the warm election day of 2008 marked the end of that regime, as the citizens chose a reasonable, well-spoken man of the people over his Bush-backed, lobbyist-laden opponent. That night, a joyful crowd gathered in front of the White House to chant “O-ba-ma” and “Yes we can!”, and to sing “Na-na-na-na Hey-hey-hey Goodbye.” And as the crowd partied on past midnight, the White House lights went out.

Amid a cacophony of car horns honking and chants of “Yes We Can” and “O-ba-ma,” there were taunts directed at the current occupant of the White House, chants of “No More Bush” and “Nah-nah, Good-bye.”

George W. Bush will not get the impeachment that he has so thoroughly earned, but at least there will be the scene of ecstatic young Americans wishing him to be gone from the White House that he illegitimately claimed in the stolen election of 2000.

As I walked among the young crowd that packed into Pennsylvania Avenue and reveled in the area around Lafayette Park, I was reminded of a very different moment nearly eight years earlier when I went with two of my sons, Sam and Nat, to a spot a few blocks away.

We stood in the chilly rain on Jan. 20, 2001, as protesters chanted angrily against Bush’s ascension to the presidency, a position he claimed with the unprecedented help of five Republican allies on the U.S. Supreme Court.

That day was a dark and ominous beginning to what has proven to be a catastrophic eight years.

I was never the likeliest candidate for this office. We didn’t start with much money or many endorsements. Our campaign was not hatched in the halls of Washington. It began in the backyards of Des Moines and the living rooms of Concord and the front porches of Charleston. It was built by working men and women who dug into what little savings they had to give $5 and $10 and $20 to the cause.

It grew strength from the young people who rejected the myth of their generation’s apathy who left their homes and their families for jobs that offered little pay and less sleep.

It drew strength from the not-so-young people who braved the bitter cold and scorching heat to knock on doors of perfect strangers, and from the millions of Americans who volunteered and organized and proved that more than two centuries later a government of the people, by the people, and for the people has not perished from the Earth.

This is your victory.

You did it because you understand the enormity of the task that lies ahead. For even as we celebrate tonight, we know the challenges that tomorrow will bring are the greatest of our lifetime — two wars, a planet in peril, the worst financial crisis in a century.

… then we were off, in the rain, me wrapped in my friend’s coat, giving hugs and high fives to strangers, all the cars stopping to let us pass through, to the White House where there were drums and cheering and singing and a giant cardboard Obama cutout being passed from hand to hand as if he were there crowdsurfing with us (‘cause you know he would) — and then we saw, unbelievably, in the crowd of 4,000, more people we knew, and we all hugged and took photos and jumped up and down and cried and then the lights in the White House went out and we said that the next day for sure Jon Stewart would talk about how President Bush tried to get all those damn kids off his lawn.

The most amazing thing was how peaceful it was. No one got hurt. No one got in any fights. (I checked the crime reports the next day.) We were all excited and many of us were drunk, but it was so joyous. Even when the crowd started singing together that “na na na na, hey hey, goodbye” song, even that was good-spirited. It was the very definition of peaceable assembly.

The president who has been MIA for all these last weeks, lest he be blamed for John McCain’s fortunes, did what only he would do in this instance. He turned out the lights at the White House.

Shortly after midnight, the celebration that had been taking place in the ambient light of the White House faded to dark, while figures continued dancing in the shadows.

← Springsteen: We are at the crossroads.
Vonnegut and Fellow Authors on Life →
Subscribe
Login
1 Comment
Oldest
Newest Most Voted
Inline Feedbacks
View all comments

A commenter on my own blog put up a post that had something very interesting to say on the topic of Bush’s leaving office. She wondered how it could be that, of all the ‘regime changes’ that have happened as a result of Bush’s shenanigans, the only one that was celebrated worldwide was Obama’s win.