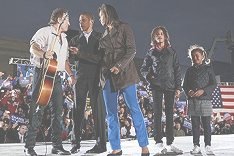 In Cleveland yesterday, 80,000 persons packed in and around Mall C for a rally for Barack Obama where Bruce Springsteen played and sang some songs. After the sing-along “This Land is Your Land”, Springsteen did a monologue, which led into “The Rising”, after which he welcomed Obama and his family to the stage. In the monologue, Springsteen strummed some chords, and gave his pitch for voting Obama, and for working to take America back from those who sold it down the river:

Now in my job I travel around the world and I occasionally play to big stadiums or crowds like this, just like Senator Obama does. And I continue to find out that wherever I go, America remains a repository for people’s hopes, their desires. It remains a house of dreams. And a thousand George Bush’s and a thousand Dick Cheney’s will never be able to tear that house down. That’s something that only we can do, and we’re not going to let that happen.

[O]ur house of dreams has been abused, it’s been looted, and it’s been left in a terrible state of disrepair. It needs defending against those who would sell it down the river for power, and for influence, for a quick buck. It needs strong arms, strong hearts, strong minds. We need someone with Senator Obama’s understanding, his temperateness, his deliberativeness, his maturity, his pragmatism, his toughness, and his faith. But most of all it needs us — it needs you and it needs me. And he’s gonna need us. Cause all that a nation has that keeps it from coming apart is the social contract between us, between its citizens. And whatever grace God has decided to impart to us, it resides in our connection with one another, and in our life and the hopes and the dreams of the man or the woman up the street or across town — that’s where we make our small claim upon heaven.

So I don’t know about you, but I know I want my country back, I want my dream back, I want my America back! Now is the time to stand with Barack Obama, and Joe Biden, roll up our sleeves, and come on up for the rising.


Audio: This Land is Your Land

“This Land is Your Land“ – barackobama.com