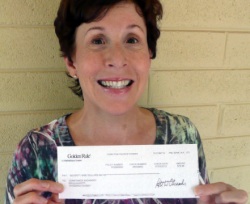 Two well-known acts of the Democratic-majority Congress of 2009-2010 have begun to pay off – literally – for Americans. One is the Dodd-Frank Wall Street Reform and Consumer Protection Act, which created the Consumer Financial Protection Bureau (CFPB). The CFPB sets and enforces standards for bank dealings with customers. Last month, the CFPB issued its first enforcement order*, following a probe of Capital One Financial Corporation. Capital One was misleading and pressuring customers to buy “payment protection” or “credit monitoring,” when one would call in to activate one’s credit card. Under the order, the bank will give each swindled customer a full refund, with interest, automatically* – no claim form needed. That adds up to about $140M for about 2 million customers. Also, Capital One will pay $25M in fines to the CFPB, and an additional $45M, including restitution for unfair billing practices, levied by the Office of the Comptroller of the Currency (OCC). The other well-known act of Congress that is putting money back in Americans’ wallets is the Patient Protection and Affordable Care Act (PPACA), also known as “Obamacare”, which has set standards for medical insurance. One of those standards is that a medical insurance company pay out 80% (85% for large employer plans) of the premiums it gets for actual health care, not administrative costs and profits. Over the past month or two, about 12.8 million customers have been getting $1.1B in rebates, automatically, from insurance companies that had a shortfall in actual health care spending last year. Neither of these acts would have passed without push from President Obama*, so these fair payments to Americans add two bullet points to the president’s re-election resumé. By contrast, Mitt Romney, Obama’s opponent in the presidential race, has said that he would repeal both the CFPB and the PPACA.

Cordray said that customers were wrongly led to believe they needed to buy the services to activate their cards or that debt protection or credit monitoring was free, while others were left with the impression that the purchase would improve their credit scores. Some customers were simply not eligible, but got billed anyway.

automatically “How will the Capital One order handle refunds?” By Kent Markus; CFPB

If you’re eligible for a refund and you have an open account, the refund will be automatically credited to your account. If you’re eligible but no longer have an account with Capital One, a check will be mailed to you. You should expect to receive your refund later this year. You don’t need to take any action to get your refund.

pay out 80% ”
Value for Your Premium Dollar” – healthcare.gov

“Prior to the passage of the Dodd-Frank Act, the President and I fought side by side to make the new agency possible,” Warren said. “And, if we need to, I know we will continue to fight side by side, to keep it strong and independent and to make sure it has the tools it needs to serve the American people.”

and the PPACA “Ask a Think Tank: Romney’s plan to repeal ‘Obamacare’ on day one” By Allen McDuffee; The Washington Post; 2012-07-02

Thank God there was enough time for these pieces of legislation to kick in. I defy someone who receives, as one lady did, a check for $900, totally unsolicited by her, as a refund from her insurance company underpaying their claims.

Oh, wait, I forgot. The way this will be turned around is that it’s interfering with free enterprise. Oh, yeah. I keep forgetting…