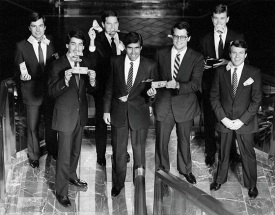 Did Mitt Romney loot a Kansas City steel workers’ pension fund and stick the U.S. Government with the bill? Signs point to “Yes.” Romney sat as CEO of Bain Capital, the buyout company he founded and molded*, during its run with GST Steel* – from buying a controlling stake in the company in 1993 to watching its bankruptcy eight years later. When the smoke cleared, a sign of looting appeared – that of the bottom line:

Another sign of looting rises from Bain Capital’s mode of operation: using other people’s money and getting paid up front. To start with, if I read the numbers right, Bain got a sweet deal, putting in only 11% of the purchase price ($8M out of the $75M) of the steel company and getting the controlling interest. Just a year later, GST issued $125M in bonds, and paid Bain a $36M dividend. A third sign of looting comes from the fact that the Bain-backed GST management was warned several times that the pension was underfunded, but nothing was apparently done to correct this sorry state. And in the end, the U.S. government pension insurance agency covered the ($44M) shortfall. As a final sign of pension looting, take the the low regard that Bain Capital seems to hold for pension contracts. GST’s labor contract called for medical insurance, severance pay and a supplemental pension to cushion the workers’ fall, in case the plant folded. But at bankruptcy time, management was able to brush off that contract clause. Neither would the the government pension insurance agency cover the supplemental pension, so the workers took the full ($27 to $120M) hit on that one. Another example of a Bain-managed company breaking a pension contract occurred in 1999 at Dade Behring, a medical diagnostics company. Management converted the pensions to cheaper, less beneficial, benefits, saving itself 10 to 40 million. Bain Capital used those savings to buff-up financial projections, which it used to borrow $421M, from which it, along with its investment partner Goldman Sachs and top Dade managers, took $365M in dividends. Carrying heavy debt, Dade went bankrupt three years later. These signs all point to looting. But in trying to answer our question, others arise:

… Romney was also a business revolutionary. Our economy went through a remarkable shift during the eighties as Wall Street reclaimed control of American business and sought to remake it in its own image. Romney developed one of the tools that made this possible, pioneering the use of takeovers to change the way a business functioned, remaking it in the name of efficiency. …

… What emerged from that long decade of change was a system that is more productive, nimble, and efficient than the one it replaced; it is also less equal, less stable, and more brutal. These evolutions were not inevitable. They were the result, in part, of particular innovations developed by a few businessmen beginning a quarter century ago. Now one of them has a good chance of becoming president.

When Bill Bain asked Romney to run the new spinoff, in 1983, the idea made sense from the perspective of Bain & Company. The senior partners were awash in cash that they were looking to invest; its more junior partners needed something to do.

Finding outside investors wasn’t as easy. … Romney finally found some takers from Latin America, most important the enormously wealthy Poma family, and by 1984, he and six consultants he’d picked were staging a photo shoot for the brochure accompanying their first fund; grinning and geeky, they posed for an outtake with dollar bills stuffed in their mouths, their sleeves, their collars.

… Within a decade, ordinary businesses were giving large stock and option packages to CEOs. Executive compensation soared. “These Bain Capital guys,” says Neil Fligstein, an economics-sociology professor at the University of California, Berkeley, “were agents of the shareholder value revolution.” By the mid-nineties, The Business Roundtable had changed its definition of the role of a company, winnowing a broad set of responsibilities down to a single one: increasing shareholder value.

Less than a decade later, the mill was padlocked and some 750 people lost their jobs. Workers were denied the severance pay and health insurance they’d been promised, and their pension benefits were cut by as much as $400 a month.

What’s more, a federal government insurance agency had to pony up $44 million to bail out the company’s underfunded pension plan. Nevertheless, Bain profited on the deal, receiving $12 million on its $8 million initial investment and at least $4.5 million in consulting fees.

His supporters say the pension gap at the Kansas City mill was an unforeseen consequence of a falling stock market and adverse market conditions. But records show that the mill’s Bain-backed management was confronted several times about the fund’s shortfall, which, in the end, required an infusion of funds from the federal Pension Benefits Guarantee Corp.

Nevertheless, Bain and its partners decided to buy the mill for $75 million. Bain put up about $8 million to gain majority control of the company, renamed GS Technologies Inc. GE Capital, former Armco executives and Leggett & Platt, a major customer for the mill’s wire rods, chipped in the rest of the equity.

As part of the deal, Armco agreed to cover employee pension obligations if the plant closed within five years — a $120 million liability, according to the Kansas City Business Journal.

GS announced plans for a $98 million plant modernization and Kansas City officials agreed to a tax break worth about $3 million, according to press accounts.

In 1995 Bain merged GS with another wire rod maker in Georgetown, South Carolina, to form one of the largest mini-mill steel producers in the U.S. The new company issued another $125 million in bonds to pay for the merger. Bain doubled down, reinvesting $16.5 million of its earlier dividend.

In 1997, with Armco’s pension guarantees set to expire in one year, the United Steelworkers local at the Kansas City plant was worried that GS was not setting aside enough money to cover pension obligations and other benefits in the event of a shutdown.

After 10 weeks, the two sides reached a deal that boosted pensions and ensured that workers would get health and life insurance in the event of a shutdown.

GS Industries declared bankruptcy on February 7, 2001, and said it would shut down the Kansas City plant, eliminating 750 jobs. In a press release, the company said the bankruptcy was triggered in part by “the critical need to restructure the company’s liabilities.”

Workers soon found out what that meant. In April, GS said it was shedding the guarantees it had promised its workers in the event of a plant closure – the severance pay, health insurance, life insurance and pension supplements that had been negotiated during the 1997 strike.

The U.S. Pension Benefit Guaranty Corp, which insures company retirement plans, determined in 2002 that GS had underfunded its pension by $44 million. The federal agency, funded by corporate levies, stepped in to cover the basic pension payments, but not the supplement the union had negotiated as a hedge against the plant’s closure.

The $120M is the cost of the prior contract’s plant closing benefits as estimated by the Kansas City Business Journal.

Wow, I love it, Quinn. You are like a terrier with a rat in his teeth–diligently digging out all the facts to bolster your observations.

Thanks, Barbara. I take that as a high compliment.