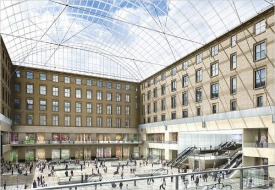 From the start, people have likened the American Recovery and Reinvestment Act of 2009, also known as “the stimulus”, to the New Deal’s famous public works program, the Works Progress Administration (WPA) started in 1935.1 2 3 Over its eight years, the WPA hired eight million people to work on 1.4 million projects, many of which built roads, bridges, sewers, airports, parks, reservoirs and electric transmission — infrastructure that has lasted decades, some to this day. While the Recovery Act did not hire workers directly, its funding, loans and loan guarantees saved or created jobs for three million people.4 Many of those people worked and are still working on the 45,000 projects that the Recovery Act classifies as infrastructure, transportation or energy/environment.5 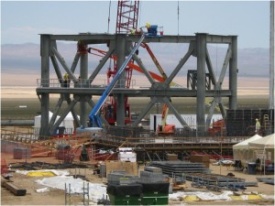 One of the bigger of those projects, the Ivanpah Mojave Desert solar plant, will stand among the world’s largest, putting out 400 megawatts of electricity. Another big power project, the Caithness Shepherds Flat Wind Farm in Oregon, will stand as the world’s largest wind farm, putting out 845 megawatts. Some of the bigger transportation building projects are the Moynihan Station Amtrak train hall in New York City, the Innerbelt Bridge in Cleveland and the Caldecott Tunnel in Oakland. And one of the biggest of the Recovery Act’s electric vehicle battery projects, the new Johnson Controls advanced battery plant in Holland, Michigan, makes complete lithium-ion battery systems for hybrid and electric vehicles. 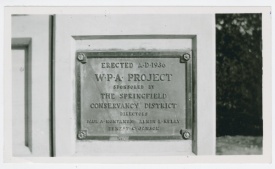 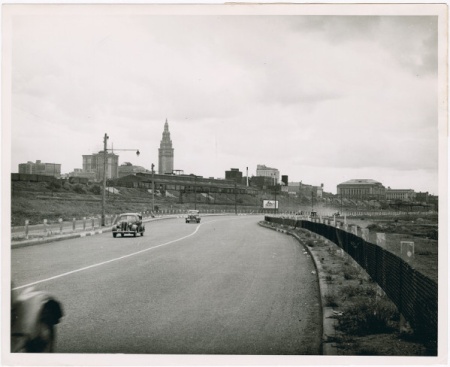 Cleveland Innerbelt Bridge – to be built with Recovery Act funding
(Old bridge to be replaced is ghosted-out in foreground.) (ODOT)

5. The stimulus will have no lasting legacy.

False. It’s been said that while the New Deal left behind a landscape of bridges and dams, the stimulus did little more than fill potholes and create a lot of temporary jobs. In truth, the Recovery Act provided critical funding for a number of projects that people will be able to point to generations from now.

Here are 10 significant projects, most under construction, funded by the Recovery Act:

The Works Progress Administration (WPA) was instituted by presidential executive order under the Emergency Relief Appropriation Act of April 1935, to generate public jobs for the unemployed. …

The WPA was charged with selecting projects that would make a real and lasting contribution — but would not vie with private firms. As it turned out, the “pump-priming” effect of federal projects actually stimulated private business during the Depression years. The WPA focused on tangible improvements: During its tenure, workers constructed 651,087 miles of roads, streets and highways; and built, repaired or refurbished 124,031 bridges, 125,110 public buildings, 8,192 parks, and 853 landing fields. In addition, workers cleaned slums, revived forests, and extended electrical power to rural locations.

Work was provided for nearly a million students through the WPA National Youth Administration (NYA). The Federal One projects employed 40,000 artists and other cultural workers to produce music and theater, sculptures, murals and paintings, state and regional travel guides, and surveys of national archives. The Civilian Conservation Corps (CCC) was a program designed to address the problem of jobless young men aged between 18 and 25 years old. CCC camps were set up all around the country.

With wartime prosperity rising in the 1940s, the WPA became more difficult to justify, and on June 30, 1943 the agency was terminated by presidential proclamation. All told, the WPA had employed more than 8,500,000 individuals on 1,410,000 projects with an average salary of $41.57 a month, and had spent about $11 billion.

(3) ‘American-Made: The Enduring Legacy of the WPA: When FDR Put the Nation to Work’ by Nick Taylor, Bantam Books, 2009

“The sole function of government,” Hoover had said in the fall of 1931, two years after the crash, “is to bring about a condition of affairs favorable to the beneficial development of private enterprise.” His predecessor, Coolidge, had put it more succinctly (a practice for which he was famous; his nickname was “Silent Cal”): “The chief business of the American people is business.”
But the New Era had failed, and Hoover’s efforts to revive it had been fruitless. Babe Ruth had put the president’s performance into harsh perspective. Early in 1930, the New York Yankees slugger was holding out for a contract that would pay him $80,000 a year. When sportswriters reminded him that the president made $75,000, Ruth responded, “What’s Hoover got to do with it? Besides, I had a better year than he did.”

And conditions were not improving. Businesses continued to fail at an unprecedented rate, more than 50,000 since the crash, and the pace of these failures was accelerating. By 1932, more than 3,600 banks had closed, robbing millions of depositors of their life’s savings. Every time a bank or business shut its doors, men and women lost their jobs and their buying power, which meant more business failures. As a result, industry was operating at a fraction of capacity, with production lines slowed or shut down entirely.

If you’ve traveled the nation’s highways, flown into New York’s LaGuardia Airport, strolled San Antonio’s River Walk, or seen the Pacific Ocean from the Beach Chalet in San Francisco, you have experienced some part of the legacy of the Works Progress Administration (WPA)–one of the enduring cornerstones of Franklin D. Roosevelt’s New Deal.
When President Roosevelt took the oath of office in March 1933, he was facing a devastated nation. Four years into the Great Depression, a staggering 13 million American workers were jobless and many millions more of their family members were equally in need. Desperation ruled the land.
What people wanted were jobs, not handouts: the pride of earning a paycheck; and in 1935, after a variety of temporary relief measures, a permanent nationwide jobs program was created. This was the Works Progress Administration, and it would forever change the physical landscape and the social policies of the United States.
The WPA lasted for eight years, spent $11 billion, employed 81/2 million men and women, and gave the country not only a renewed spirit but a fresh face. Under its colorful head, Harry Hopkins, the agency’s remarkable accomplishment was to combine the urgency of putting people back to work with its vision of physically rebuilding America. Its workers laid roads, erected dams, bridges, tunnels, and airports. They stocked rivers, made toys, sewed clothes, served millions of hot school lunches. When disasters struck, they were there by the thousands to rescue the stranded. And all across the country the WPA’s arts programs performed concerts, staged plays, painted murals, delighted children with circuses, created invaluable guidebooks. Eventoday, more than sixty years after the WPA ceased to exist, there is almost no area in America that does not bear some visible mark of its presence.

(4) ‘THE ECONOMIC IMPACT OF THE AMERICAN RECOVERY AND REINVESTMENT ACT OF 2009 – SEVENTH QUARTERLY REPORT’ – JULY 1, 2011, COUNCIL OF ECONOMIC ADVISERS

CEA estimates that as of the first quarter of 2011, the ARRA has raised employment relative to what it otherwise would have been by between 2.4 and 3.6 million.

(5) Recovery Explorer – recovery.gov
Projects by Category and Portion Completed through 2011-09-07:

← Where are all the bad teachers?
Welcome to the Plutonomy Backlash →
Subscribe
Login
0 Comments
Inline Feedbacks
View all comments