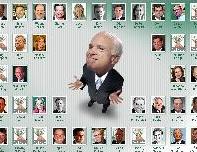 Earlier this year, John McCain tried to defend the fact that his presidential campaign was jam-packed with lobbyists:

[T]hey’re honorable people, and I’m proud to have them as part of my team.

The right to represent interests of groups of Americans is a constitutional right. There are people that represent firemen, civil servants, retirees, and those people are legitimate representatives of a variety of interests in America.x50

But the lobbyists holding top spots in McCain’s campaign do not represent firemen, civil servants and retirees. Rather, they represent big corporations and foreign governments. Of McCain’s many lobbyists, here are three prime examples:

The sorry record of his top advisers shows that a McCain presidency would strive to continue the Bush years of disastrous foreign and economic policy — and government that serves those big corporations and foreign politicos that shell out to the sleaziest cronies on K Street.

50 ‘McCain says his lobbyists are ‘honorable,’ but they don’t work for ‘legitimate’ causes he picks’ by Michael Roston, The Raw Story, February 22, 2008

54 ‘While Aide Advised McCain, His Firm Lobbied for Georgia’ By Matthew Mosk and Jeffrey H. Birnbaum, The Washington Post, August 13, 2008, Page A03

For months while McCain’s presidential campaign was gearing up, Scheunemann held dual roles, advising the candidate on foreign policy while working as Georgia’s lobbyist. Between Jan. 1, 2007, and May 15, 2008, the campaign paid Scheunemann nearly $70,000 to provide foreign policy advice. During the same period, the government of Georgia paid his firm $290,000 in lobbying fees.

In 2005, while registered as a paid lobbyist for Georgia, Scheunemann worked with McCain to draft a congressional resolution pushing for Georgia’s membership in NATO. A year later, while still on the Georgian payroll, Scheunemann accompanied McCain on a trip to that country, where they met with Saakashvili and supported his bellicose views toward Russia’s Vladimir Putin.

“You’ve heard of mental depression; this is a mental recession,” he said, noting that growth has held up at about 1 percent despite all the publicity over losing jobs to India, China, illegal immigration, housing and credit problems and record oil prices. “We may have a recession; we haven’t had one yet.”

“We have sort of become a nation of whiners,” he said. “You just hear this constant whining, complaining about a loss of competitiveness, America in decline” despite a major export boom that is the primary reason that growth continues in the economy, he said.

Clearing the way for that California price gouging, Gramm, as a powerful Texas senator in 2000, slipped an Enron-backed provision into the Commodities Futures Modernization Act that exempted from regulation energy trading on electronic platforms.

Then, over the next year, Enron – with Gramm’s wife Wendy serving on its board of directors – worked to create false electricity shortages in California, bilking consumers out of an estimated $40 billion.

62 ‘Could McCain Have Come Up with a More Ill-Suited Economic Advisor Than Phil Gramm?’ By Patricia Kilday Hart, Texas Observer, June 18, 2008.’

While his distracted peers probably finalized their Christmas gift lists, Gramm created what Wall Street analysts now refer to as the “shadow banking system,” an industry that operates outside any government oversight, but, as witnessed by the Bear Stearns debacle, requiring rescue by taxpayers to avert a national economic catastrophe.

[…] public links >> trading McCain Neck-Deep in K Street Sewer First saved by NeoSizer | 1 days ago Thank You For Reading and For All Your Comments! First […]

[…] links >> corporations Pity the poor corporations Saved by mileyhannahlover on Fri 09-1-2009 McCain Neck-Deep in K Street Sewer Saved by nejifangirl123 on Mon 05-1-2009 While we are counting blue and red states, what about […]