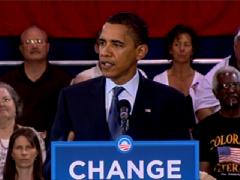 Last week Barack Obama gave a speech laying out his plan for getting more citizens active in serving American society.x40 Some points of his plan are: to boost the numbers in the military, Peace Corps and Americorps, to make it easy to volunteer, and to give volunteers help with the cost of college. He said:

… I won’t just ask for your vote as a candidate – I will ask for your service and your active citizenship when I am President of the United States.

This will not be a call issued in one speech or one program – this will be a central cause of my presidency. We will ask Americans to serve. We will create new opportunities for Americans to serve. And we will direct that service to our most pressing national challenges.

I think Obama’s plan for active democratic citizenship is thoughtful and practical. But I would like to offer a half-baked and revolutionary plan: Make every citizen a councilman. Here are the plan’s rough-hewn planks:

This plan has several advantages. For one, it gives all citizens real, tangible power. And with so many involved, the government would be hard to corrupt. With only twelve votes in any election, it would eliminate campaigning by TV commercial — and each citizen would know the person one was voting for. Citizens would gain leadership experience, so that even the nation’s bowling leagues and art clubs would be better run. Further, the plan could be used by any country, and at the worldwide level, where three councils of twelve stand to work more effectively than the present U.N. in stopping war and climate change.

I think the plan would be best implemented from the ground up, so that the citizenry is quickly engaged. Within two or three years, old city councils would be replaced with new, and the process would be rolling along.

The 18 million grassroots councils would involve 214,990,848 persons, which would be about the adult population of the U.S.A. not holding higher office.

42 ‘Jefferson’s Dream: The Bill of Rights’ by Thom Hartmann

Well, i hope the waitress can bring my coffee before she has to go to her meeting. Sounds like the old USSR and their incessant meetings to criticize each other. Not many folks realize that the average large city councillor must read, digest, confer and decide on a stack of reports a foot high EVERY MONTH or so. Thats just one level. Referenda are hard enough to be reasonably done and probably represents the maximum point of democracy in a large society. However i do know a real life situation that can work although it does not always work. The Philippines under Marcos established a “barangay” system where the country was divided up into “villages” of 2000 people, even in Manila. These villages elected a council of about 9 people as i recall who looked after garbage, dog control, local paving, lighting, etc. and received about 10 % i think of the taxes collected in the area for their efforts. They were able to decide on curfews for kids and patrolled the neighbourhood for strange people hanging around. Worked well for drugs, prostitution etc. Unfortunately the marcos regime took a turn for the worse and these units became enmeshed with crime/ thugs. I visited one that worked and was quite impressed. Google it if interested.

The plan requires just two meetings a year, so I hope people at the Grassroots level wouldn’t strain themselves by scheduling too many more. Regarding the workload at the city or county levels — with the work spread out, I think it would lighten the load on those concillors.

Very interesting about Phillipines councils. Thanks for that info.