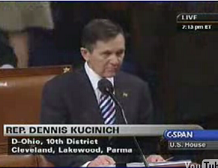 Two weeks ago Rep. Dennis Kucinich (D-OH) brought an impeachment resolution against President George W. Bush to the House floor.x30x31 It took him nearly five hours to read the resolution’s 35 articles.x32 Each article charges Bush with a criminal act, cites the laws violated and gives supporting evidence.x33 Among the criminal acts are: pushing false propaganda to promote war against Iraq, spending funds marked for operations in Afghanistan to prepare the Iraq invasion, attacking Iraq without meeting Congress’s requirement that such force would help fight 9-11 culprits, failure to provide available vehicle and body armor to U.S. soldiers in Iraq, helping expose CIA spy Valerie Plame, helping and allowing massive fraud and waste in Iraq contracts, false imprisonment, authorizing and encouraging torture, authorizing and encouraging kidnapping, permitting imprisonment of children, making secret law, using the military in domestic law enforcement, warrantless wiretapping of American citizens, using signing statements to violate laws, refusing to comply with Congressional subpoenas, corrupting the Justice Department to undermine fair elections, conspiring to corrupt and manipulate the 2004 & 2006 elections, deceiving Congress about cost in order to get his Medicare drug bill passed, failure to prepare for and respond to Hurricane Katrina, altering scientific findings about climate change, ignoring 9-11 warnings, and obstructing 9-11 investigation. Congress sent the measure to the Judiciary Committee, where Kucinich’s earlier bill to impeach Vice President Dick Cheney has, by and large, sat moldering for more than a year.x34x35 But Kucinich says the Bush impeachment measure will be different:

Leadership wants to bury it, but this is one resolution that will be coming back from the dead. … We’ll come back and many of us will be reading this [on the House floor], and we’ll come back with 60 articles, not 35.x36

So, many of Bush’s crimes are now on an official, historical record. And each Congressman has the chance to sign-on and show that one stood for the Constitution and the Republic.

30 Links to each article of impeachment with full text and video of Kucinich reading it – kucinich.us