“Honestly, I’m just getting paid to hold someone’s seat,” said one person attending the Federal Communications Commission (FCC) hearing in Boston last week (on 2008-02-25). “I don’t even know what’s going on.“x30 The FCC called the hearing to investigate citizens’ complaints that Comcast, the nation’s second largest Internet service provider (ISP), was blocking BitTorrent traffic. But hours before the hearing started, Comcast was blocking the public — stuffing seats with its own employees, and with other persons that it paid to attend. As the hearing began, many interested citizens stood out in the cold, while some of the paid attendees in the hearing room took a nap. Comcast’s data blocking came to light in October last year with an Associated Press (AP) investigative report, where the AP could not transmit a copy of the Bible.x31x32 David Reed of MIT’s Media Lab also investigated and told the FCC what he found — that Comcast secretly forged reset data packets to disconnect users.x33 By blocking BitTorrent, Comcast hampers an on-demand video delivery method that competes with Comcast’s cable TV business.x34 Such blocking violates FCC net neutrality standards: that Internet users are entitled to the content, applications and services of their choice.x35 But while the FCC has adopted those standards, it has voided the long-standing, key net neutrality standard — that an ISP shall not favor or hamper a data packet based on who sent it, who owns it, or who will get it.x36 AT&T and Verizon have stated that they plan to jump through that loophole, and implement a sort of extortion scheme — charging content providers for priority data transmission, while slowing the data packets of those who don’t pay.x37x38 But Congress could head them off. Last month, Reps. Ed Markey (D-MA) and Chip Pickering (R-MS) introduced the Internet Freedom Preservation Act of 2008, to ensure net neutrality standards.x39 The bill now waits in the Energy and Commerce Committee.

Click HERE to urge your Congressman to sponser the Internet Freedom Preservation Act. 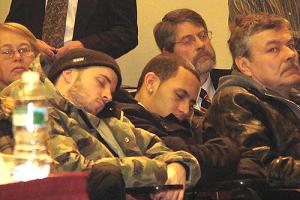 As the hearing began, paid attendees took a nap.

33 ‘In Boston: A Shot Heard ‘Round the Internet’ February 29th, 2008 by tkarr, SaveTheInternet.com

“There a single fact here that [Comcast] cannot deny,” explained Columbia Law Professor Tim Wu during Monday’s hearing. “Users of the Internet sought to use an application in a certain way, and they were blocked.”

This view was supported by David Reed of MIT’s Media Lab, who had also experimented with popular file-sharing applications and found that Comcast was duping users with forged network transmissions that cut off user connections. “Comcast’s secretive attempt to apply non-standard management practices creates serious problems,” he said before the FCC.

Here’s what Comcast really doesn’t like about BitTorrent: It’s competition for their own video business. If we can pick and choose what we want to see for ourselves, we might be less inclined to keep paying Comcast an arm and a leg for all the channels we don’t watch.

Almost 40 years ago, the Federal Communications Commission was confronted with the question of how to handle the transmission of data over the telephone network. In a series of proceedings beginning in 1968 known as the Computer Inquiries, the FCC decided that the companies providing communications services would not be allowed to interfere with or discriminate against information services. When a federal court broke up Ma Bell in 1982, it required the Baby Bells to provide nondiscriminatory interconnection and access to their networks. These decisions to require the communications network to treat information service in a nondiscriminatory manner established one of the key building blocks of the Internet.

The idea is simple. Under the law, the physical wires over which data and information flow are treated differently than the data and information themselves. The number of physical networks to transmit data and information is very small and non-competitive (at best, most consumers have a choice of only cable or DSL). Public policy keeps the owners of these networks from using their monopoly (or duopoly) market power over the wires to discriminate against the information providers on their networks.

If the network owners can’t mess with the content, the content market remains free and vigorously competitive. The separation of the physical communications layer from the content and applications layers is a cornerstone of telecommunications law. It established an “end-to-end” network, putting control of the Internet in the hands of the users at the edges.

But in the summer of 2005, the FCC removed the cornerstone. This decision was the culmination of several years of litigation. After years of bombardment by lobbyists and lawyers from the cable and telephone giants, the FCC first tried to take away nondiscrimination protections in 2002. The courts reversed them. But the cable companies and the FCC kept appealing, and eventually the Supreme Court heard the matter in July 2005. In the case of NCTA v. Brand X, the Court ruled simply that the FCC had the authority to make the decision, good or bad. They did not rule on the merits. So it happened that last August, in the midst of the Internet revolution, the FCC handed total control over to the telephone and cable companies to do as they please.

Edward Whitacre, AT&T CEO: “… there’s going to have to be some mechanism for these people who use these pipes to pay for the portion they’re using. Why should they be allowed to use my pipes? The Internet can’t be free in that sense, because we and the cable companies have made an investment and for a Google or Yahoo! or Vonage or anybody to expect to use these pipes [for] free is nuts!”

William Smith, BellSouth CTO: [Smith] told reporters and analysts that an Internet service provider such as his firm should be able, for example, to charge Yahoo Inc. for the opportunity to have its search site load faster than that of Google Inc. Or, Smith said, his company should be allowed to charge a rival voice-over-Internet firm so that its service can operate with the same quality as BellSouth’s offering.

Ivan Seidenberg, Verizon CEO: “We have to make sure they don’t sit on our network and chew up our capacity. We need to pay for the pipe.

But no one is using the “pipes” for free:

With Network Neutrality, [telecoms will] continue to generate revenues in the billions from monthly subscription fees, access rates from content producers (who already pay a fortune to get onto the network), and by competing in the free market with their own content and applications. Getting rid of Network Neutrality is just an attempt to extract monopoly rents from a new revenue stream.

to preserve and promote the open and interconnected nature of broadband networks that enable consumers to reach, and service providers to offer, lawful content, applications, and services of their choosing, using their selection of devices, as long as such devices do not harm the network; and

to safeguard the open marketplace of ideas on the Internet by adopting and enforcing baseline protections to guard against unreasonable discriminatory favoritism for, or degradation of, content by network operators based upon its source, ownership, or destination on the Internet.