U.S. Vice President Cheney, a major architect of the Bush regime’s invasion and occupation of Iraq, visited Baghdad Monday, and gave this assessment:

So if you reflect back on those five years, I think it’s been a difficult, challenging, but nonetheless successful endeavour and that we’ve come a long way in five years and it’s been well worth the effort.x60

But Cheney’s happy talk fades fast into the sad reality of Iraq. There violence has killed 100,000’s of citizens and thousands of U.S. and allied soldiers, and kills more day-by-day.x61 There violence has driven millions of citizens from their homes. There the five years of violence and neglect have destroyed the infrastructure, and millions of citizens lack safe drinking water and electricity. There half the citizens who need a paying job can’t find one. There, where the country’s major income is oil, it has not flowed for a single day as it had before the invasion. There the U.S. government has spent a half trillion dollars, and spends three billion a week more to maintain the occupation, its massive embassy in the “green zone”, its new military bases, and the lush profits of its corporate contractors.x62

Sen. John McCain, to whom President Bush wants to pass the war baton, also visited Baghdad this week, and also spoke happily: “We find a continued success of the strategy …”, and “The surge is working.” But the time for the “surge” is up, and it has failed. Its benchmarks have not been met and there is no exit in sight for U.S. troops.x63 That does not seem to faze McCain. Instead of an exit plan, he has a staying dream, where the Iraqi government and people welcome U.S. troops for “maybe a hundred years”.x64 But since Bush war policy has played out in the torture at Abu Ghraib, the siege of Fallujah, and loose rules of engagement, such welcome seems unlikely.x65x66x67 So what way forward do we have? Southern Iraq gives a clue: since the British occupation troops left Basra, violence has dropped 90%.x68 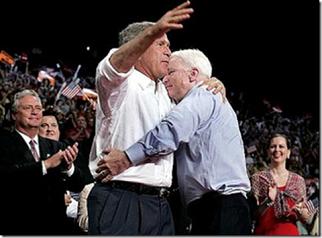 Despite the failure of the surge to meet its political goals, war hawks are rushing to declare victory. Writing in the Wall Street Journal today, Sens. John McCain (R-AZ) and Joe Lieberman (I-CT) declare that “the surge worked.”

Here are a few examples of how their claims of “victory” do not correspond with the reality in Iraq:

FACT: In October, the Government Accountability Office assessed that of the eight political benchmarks set forth by President Bush and Congress, the Iraqi government had only “met one legislative benchmark and partially met another.” Since then, progress has stalled on key areas laid out by Bush: an oil law, de-Baathification reform, a process for amending the Constitution and provincial elections.

CLAIM: “Conditions in that country have been utterly transformed from those of a year ago, as a consequence of the surge.”

FACT: Though the “surge” has helped Sunni Arabs in Anbar province push al Qaeda in Iraq to the sidelines, the decision to turn on al Qaeda was not caused by the “surge.” U.S. commanders wisely “took advantage of these changing dynamics,” but they did not cause them. Additionally, as al Qaeda’s presence has decreased, sectarian strife has increased.

CLAIM: “We have at last begun to see the contours of what must remain our objective in this long, hard and absolutely necessary war — victory.”

FACT: Only politicians and pundits are speaking of victory. At the end of last year, Gen. David Petraeus, the top U.S. commander in Iraq, cautioned that “recent security gains are fragile and still reversible.” “We are trying to be cautious as we describe the progress that is taking place in Iraq,” Petraeus told Foreign Affairs. “There are a number of concerns that we do have.”

After the event ended, I asked McCain about his “hundred years” comment, and he reaffirmed the remark, excitedly declaring that U.S. troops could be in Iraq for “a thousand years” or “a million years,” as far as he was concerned. The key matter, he explained, was whether they were being killed or not: “It’s not American presence; it’s American casualties.” U.S. troops, he continued, are stationed in South Korea, Japan, Europe, Bosnia, and elsewhere as part of a “generally accepted policy of America’s multilateralism.” There’s nothing wrong with Iraq being part of that policy, providing the government in Baghdad does not object.

In other words, McCain does not equate victory in Iraq — which he passionately urges at campaign events — with the removal of U.S. troops from that nation.

The U.S. says it takes particular care in both Afghanistan and Iraq to avoid killing or injuring non-combatants. And it is true that the rules of engagement have become more restrictive and that the U.S. has used more precision guided munitions in both conflicts than in any previous wars. So, what explains this surge in non-combatant deaths? There are three main factors.

First, the United States has significantly increased “close air support” operations in both countries. In other words, when U.S. and NATO ground forces come into contact with insurgents, the U.S. has increasingly tended to call on helicopters and fixed wing aircraft to fire on targets. While pre-planned attacks can take risks to civilians into account through “collateral damage estimates,” close air support operations are done on the fly and often with poor intelligence. The majority of the deaths recorded in the last year were caused in these operations.

Second, while the Pentagon has increasingly restricted the rules for when its soldiers can use deadly force, the rules of engagement are too permissive, permitting the use of force if the soldier feels threatened with “hostile intent.”

Third, U.S. forces are understandably stressed and therefore sometimes too quick to fire in ambiguous situations. Troops rotations are long, combat stress is high, and returning soldiers report attitudes of contempt for Iraqi and Afghan civilians. This combination of contempt, fear, and fatigue is a toxic brew.