Did you hear that Rep. Dennis Kucinich (D-OH) brought articles of impeachment against Vice President Dick Cheney to the House floor on Tuesday of last week10? The nation’s leading paper, The New York Times didn’t carry the story, and it may well be that your local newspaper also didn’t have it11x20. The Washington Post, with the federal government as its local beat, did run a piece on the event, but it was a cutesy comment column (“Kucinich’s Battle Against Cheney Not So (Im)Peachy Keen”) that mocked the impeachment move and the man who brought it12. Shouldn’t the first formal impeachment move from the new Democratic-majority Congress merit a serious story on the front page of the nation’s newspapers? On the evening following the event, you could find a fair, informative article on some Internet news sites – for instance, The Raw Story, CQ Politics, CNN and Fox News13x14x15x16. As for network and cable TV, I don’t know if their regular newscasts covered the story, but CNN‘s Wolf Blitzer did interview Kucinich on the matter that evening during his daily news show17. At any rate, Kucinich’s impeachment measure contains three articles:

Kucinich supports these claims with 15 or 16 documents for each article. He said it was important to take this action now to stop Cheney from starting a war against Iran18. Asked about impeaching Bush, Kucinich said that impeaching Cheney first was the responsible way, because the other way Cheney would become President, and it would be agonizing for the nation to impeach two presidents, one after the other. Kucinich also gave a basic reason for the impeachment move:

It’s not appropriate for the government to lie to people. It is wrong for government officials — you know, the vice president, in this case — to take this nation into war based on lies.

And so, again, this becomes a question of who we are as a people. And so this resolution 333, articles of impeachment against the vice president, will let future generations know that no one is above the law of this country and that Congresses have the specific responsibility to provide a check to administrative abuse of power. That’s the way the framers set this government up.

Results of The Paragraph‘s online poll taken between May 3rd and June 30th: 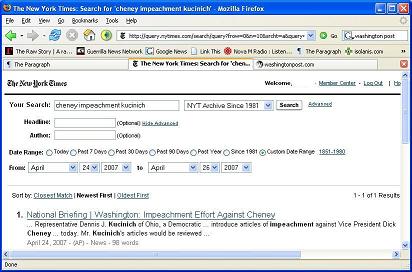 12 ‘Kucinich’s Battle Against Cheney Not So (Im)Peachy Keen’ By Dana Milbank, The Washington Post, Wednesday, April 25, 2007

… consider Rep. Dennis Kucinich’s filing, last Tuesday, of a bill of impeachment against Dick Cheney in the House of Representatives. Clearly a historic event—the first concrete step towards impeachment in the House in the new Democratic-led Congress—the bill, which charges Cheney with lying about Iraq having WMDs, lying about a non-existent link between Saddam Hussein and Al Qaeda, and illegally threatening Iran with an invasion (a crime under international, and US, law), went unreported in the New York Times, supposedly the nation’s “newspaper of record.” As for the Washington Post, the next day all it had was a sophomoric, pissy column by Dana Milbank, which spent most of its time belittling Kucinich’s short stature and bad hairstyle. The nationwide demonstrations calling for impeachment held in over 150 different cities across the country on Saturday went unmentioned in Sunday’s New York Times, though there was an article in the Washington Post about the event at the Washington Monument in the paper’s own city (it failed to mention that events were going on elsewhere too.)

Thanks for posting all of this up.