“I do not wish to Bush bash,” said Professor Walter Murphy in his speech at Princeton University last September, “but I do see that we are in the midst of a very severe [Constitutional] crisis01.” Murphy, a top constitutional scholar02, said that change in the U.S. Constitution, which occurs mostly through interpretation and usage, is inevitable, but that:

The general trajectory of changes in our constitution … has been to more broadly define the people, to increase government responsiveness to the people, and to increase protections for individual freedom and dignity. In sharp contrast, as I will point out, the general trajectory of this administration’s efforts to change the Constitution has been to loosen governmental responsibility and to constrict individual liberty.

“The accumulation of all powers, legislative, executive and judiciary, in the same hands, whether one, a few or many, and whether hereditary, self-appointed or elected, may justly be pronounced the very definition of tyranny.” This accumulation is precisely what Bush [claims is rightfully] his.”

Murphy pointed out several ways that Bush has taken legislative and judicial power:

Murphy compared Bush’s theory of government to that underpinning Naziism:

The blueprint for this phase of the presidency was not drafted by James Madison, but by Carl Schmitt, an academic apologist for Naziism. Again, I’m not Bush bashing – I would not equate Bush’s errors, as dangerous as they are, to the unspeakable evils of Adolph Hitler – but it is instructive to compare Carl Schmitt’s justification of the Nazis’ claim to total governmental power with that of Bush. … [Schmitt] said … it would be [the dictator] alone who would determine what was necessary and legitimate to protect [the] nation. … “The fuhrer,” he wrote, “is not an agent of the state, but the highest judge of the nation, and its law-giver.” That doctrine was alien to Madison … But it does fit the current administration’s description of the presidency: not answerable to Congress, not answerable to the court, not obliged to give the information that allows us as citizens to pass judgement.

Several months after that speech, Murphy, a retired Marine colonel decorated for heroism in the Korean War, went to the Albuquerque airport to catch a flight to Princeton, but was at first denied a boarding pass for being on the terrorist watch list. Last week a blog published Murphy’s story02:

I presented my credentials from the Marine Corps to a very polite clerk for American Airlines. One of the two people to whom I talked asked a question and offered a frightening comment: “Have you been in any peace marches? We ban a lot of people from flying because of that.” I explained that I had not so marched but had, in September, 2006, given a lecture at Princeton, televised and put on the Web, highly critical of George Bush for his many violations of the Constitution. “That’ll do it,” the man said.

After carefully examining my credentials, the clerk asked if he could take them to TSA (Transportation Security Administration) officials. I agreed. He returned about ten minutes later and said I could have a boarding pass, but added: “I must warn you, they’re going to ransack your luggage.” On my return flight, I had no problem with obtaining a boarding pass, but my luggage was “lost.” Airlines do lose a lot of luggage and this “loss” could have been a mere coincidence. In light of previous events, however, I’m a tad skeptical.”

The U.S. government keeps secret how someone gets on the terrorist watch list, and whether a particular person is on it03. For someone wrongly listed, the government provides no good procedure for remedy04. Professor Murphy talked with others who had similar trouble, and believes his case fits the Bush administration’s pattern of punishing critics05:

I confess to having been furious that any American citizen would be singled out for governmental harassment because he or she criticized any elected official … That harassment is, in and of itself, a flagrant violation not only of the First Amendment but also of our entire scheme of constitutional government. This effort to punish a critic states my lecture’s argument far more eloquently and forcefully than I ever could. Further, that an administration headed by two men who had “had other priorities” than to risk their own lives when their turn to fight for their country came up, should brand as a threat to the United States a person who did not run away but stood up and fought for his country and was wounded in battle, goes beyond the outrageous. Although less lethal, it is of the same evil ilk as punishing Ambassador Joseph Wilson for criticizing Bush’s false claims by “outing” his wife, Valerie Plaime, thereby putting at risk her life as well as the lives of many people with whom she had had contact as an agent of the CIA. …

I have a personal stake here, but so do all Americans who take their political system seriously. 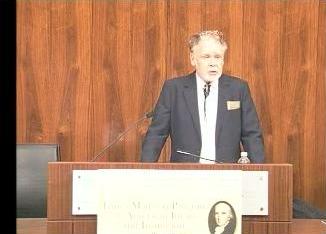 01 ‘Is the Constitution Dead or Merely Sleeping?’ by Walter Murphy, McCormick Professor of Jurisprudence Emeritus, Princeton University, 2006-09-19; audio and video of lecture

05 ‘Professor: Bashing Bush Got Me on Watch List; Suggests NSA Might Have Taken Him Off’ by Ryan Singel, Wired Threat Level blog, 2007-04-10