“My father always taught me to be strong and have dignity, to not have to bow down or have anyone run over you,” said Bunnatine Greenhouse20. An older brother and sister each earned doctorates and taught at universities, her younger brother earned a place in the National Basketball Association hall of fame (Elvin Hayes), and Greenhouse got three masters degrees over the years. In 1968 she went back to her hometown, Rayville, Louisiana, to teach mathematics at the high school. “At the time, I didn’t quite know what to make of a black person who didn’t have a hoe in their hand,” recalled one of her white students. “She had been somewhere else, she was cosmopolitan, she was sophisticated. It really changed my viewpoint.” After 16 years teaching, Greenhouse followed her husband into a career as an Army procurement officer. While working at the Pentagon, she learned the details of contracting and climbed the ladder. In 1997, she reached the top rung when the Commander of the U.S. Army Corps of Engineers (USACE), Lt. Gen. Joe Ballard, hired her as the Principal Assistant Responsible for Contracting (PARC). Ballard wanted Greenhouse, “one of the most professional people I have ever met”, to break up the “good old boys’” network. And so she did, implementing strict adherence to the book and finding ways to save tens of millions of dollars. “There wasn’t another SES (Senior Executive Service) who could touch me sideways,” she said.

During the ramp-up for President George W. Bush’s Iraq war, there came rushing towards the clicking machinery of Greenhouse’s office a runaway train – the Halliburton War Profits Express. Vice President Dick Cheney, after serving as Secretary of Defense in the Bush I administration, had gone through the government-corporate revolving door to lead Halliburton to become a major recipient of military contracts21. Halliburton wanted the $7 billion, cost-plus Restore Iraqi Oil (RIO) contract. “[O]nce the OSD (Office of the Secretary of Defense) delegated responsibility for the RIO contract to the Department of the Army, control … by the OSD should have ceased,” Greenhouse testified at a Democratic Senate hearing22. “However, the OSD remained in control … In reality, the OSD ultimately controlled the award of the RIO contract to KBR (a Halliburton subsidiary) and .. the terms … even over my objection to specific terms …” Two specific terms Greenhouse objected to were the lack of competitive bidding and the five-year duration. In December 2003, a Defense Department audit showed that, under the RIO contract, KBR had over-charged the government for fuel by $61 million. One day when Greenhouse was sick and working from home, the Commander of the USACE, Lt. Gen. Flowers, gave KBR a blanket waiver for the overcharge23x22. “They wanted to get this one through without a lot of scrutiny from Bunny Greenhouse,” she said. “I would not have allowed my boss to sign such a document.” Over the course of this and KBR‘s other, larger Iraq contract (LOGCAP), it has gotten $16 billion in taxpayer money and its CEO, David Lesar, has gotten $100 million in pay24x25.

In October 2004 the Corps’ deputy commander, Maj. Gen. Robert Griffin, informed Greenhouse that she would be removed as PARC, and offered her early retirement. “At that point I knew that my ability to resolve the issues within the USACE had terminated,” she said. “I had no other alterative … but to file a formal request for investigation with the then-Acting Secretary of the Army and to appropriate members of Congress.” “What Bunny is caught up in is politics of the highest damn order,” said (retired) Gen. Ballard35. “This is real hardball they’re playing here. Bunny is a procurement officer, she’s not a politician. She’s not trained to do this.” On August 27th, 2005, Greenhouse was finally demoted36. “[I was] taken totally out of contracting,” she said. “Placed as a program manager with no programs and no taskings, you know, to actually do23.” That same day, President Bush declared a state of emergency in Louisiana because of Hurricane Katrina, and another round of rush, no-bid contracts were set to be handed to KBR26.

With Republicans time-after-time voting against Democratic calls for investigation of and new laws against war profiteering24x27x28x29x30, and with news of KBR abuses of their LOGCAP contract – ghost charges, waste, over-charges, delivering bad food and water to the soldiers – in July, 2006, the Army announced an end to that KBR contract31x24x32. The Army said it would break the work into three parts – but KBR could still bid. “Well, it’s time,” Greenhouse said33. “And I hope that it’s absolutely not a window dressing. … When you don’t see the … ultimate of competition that you know is gonna bring best value for those war fighters out there who are sacrificing, we need to make sure that the behavior of those contractors are changed. … It’s a great day.” “Bunny has a lot of faith,” said her husband Aloysius, a career Army man35. “She really believes that someone will stand up and say, ‘This is wrong.’ But I don’t think a person exists like that in the Department of Defense.”

Greenhouse recalled: “When I was going to the first hearing, the acting general counsel [of the USACE] … let me know in no uncertain terms that it was not in my best interest … to have testified. And remember, contracting – the lineage of that authority comes from Congress33. So, what right do I have if Congress is calling me to explain some of the improprieties or some of the concerns that I may have had. … You know, we are in a democracy … [and] I am a civil servant.” 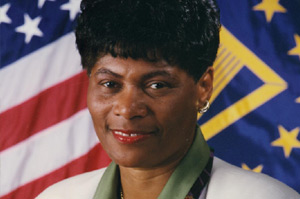 Impeachment: In a June 2006 report, the Democratic minority of the House Judiciary Committee listed as one of Bush’s and Cheney’s violations of law: “Federal laws concerning retaliating against witnesses and other individuals, for example, demoting Bunnatine Greenhouse, the chief contracting officer at the Army Corps of Engineers, because she exposed contracting abuses involving Halliburton34.”

26 ‘Big, Easy Iraqi-Style Contracts Flood New Orleans’ By Pratap Chatterjee, Corpwatch.org “Chief among these contractors are companies such as Halliburton and Bechtel, which have been awarded pre-bid, limited bid, and sometimes no-bid contracts to assess the damage, provide emergency shelters and fix the infrastructure.”

34 ‘The Constitution in Crisis ‘ – Democratic Minority of the House Judiciary Committee, June 2006

I thought you might be interested in reading a letter from Bunny Greenhouse urging all Americans to assist her in her fight for greater oversight and accountability in the stimulus bill. You can read Bunny’s letter and help her protect taxpayer dollars by visiting http://capwiz.com/whistleblowers/issues/alert/?alertid=12612091.

Halliburton whistleblower Bunny Greenhouse has written a new letter in response to Congress cutting whistleblower protections for federal employees from the final version of the stimulus bill. You can read the letter at http://capwiz.com/whistleblowers/issues/alert/?alertid=12666936
and sign the new petition at http://www.whistleblowers.org.