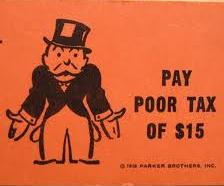 Before addressing the “hit hardest” claim, let’s touch on McConnell’s claims about job creation and “adventure in expanded government.” Here are a few of the relevant facts:

Now, let’s consider McConnell’s notion that someone making a quarter-million-plus would be among those “hit hardest by this recession”. Surely there would be no room left in that category, once one had considered the millions thrown out of work – and out of house and home.9+10 So it seems McConnell’s words just show where his sympathy lies – and one way the GOP earns the title: “Party of the Rich.”11

2 ‘Sen. McConnell Defends Tax Cuts For The Rich To Protect The People ‘Hit Hardest By This Recession’‘, PoliticalCorrection.org, September 13, 2010

Despite that emotional appeal, Internal Revenue Service statistics indicate that only 3 percent of small businesses would be subject to the higher tax, and many studies of previous tax increases suggest that it would have minimal impact on hiring.
According to the Joint Committee on Taxation, 97 percent of all businesses owners do not earn enough to be subject to the higher rates, which would be levied on income of over $200,000 for individuals and $250,000 for families.

The brute facts are these:

All this is especially true as applied to the top tax rates, the amount paid on income that exceeds the highest bracket.

CBO estimates that ARRA’s policies had the following effects in the second quarter of calendar year 2010:

… “Washington may live and die by the pronouncements of the Congressional Budget Office,” wrote the pollsters Doug Schoen and Scott Rasmussen in the Wall Street Journal, “but 81 percent of voters say it’s likely [health care reform] will end up costing more than projected.”

That’s left Democrats in a worst-of-both-worlds situation: They’ve built a bill that Washington’s toughest scorekeeper says will cut the deficit by more than a trillion dollars over 20 years. They’re getting attacked for the taxes and Medicare reforms that save all that money. But the country doesn’t believe the savings are real.

One of the problems Democrats have had is that it’s very easy to understand the one thing the bill does to spend money—purchase insurance for people who can’t afford it—and considerably harder to explain the many things it does to save money. Another is that a lot of the savings have to do with changing how medicine is practiced, which people are less familiar with than how insurance is purchased.

But the fact that the cost controls are complicated and numerous doesn’t mean they’re absent, or that they won’t work. Here’s a guide to a few of the bill’s best ideas, and how they work: …

7 ‘About the Law’ – HealthCare.gov

9 ‘Unemployment rate falls, but recession’s toll is worst since the ‘30s’ By Laurent Belsie, The Christian Science Monitor, February 5, 2010

You can capitalize it now: It’s the Great Recession. And it has cost the United States more jobs than any downturn since the Great Depression.

The job losses were already big before the Labor Department revised its figures Friday. Now, they’re staggering: 8.4 million jobs have disappeared since the recession’s start in December 2007.

Brown represents one of the more than 1.2 million households lost to the recession, according to a report issued this week by the Mortgage Bankers Association that looked at data between 2005 and 2008. That number doesn’t include information from 2009, when job losses and foreclosures continued to rise.

So it’s likely that the full impact of the 8.4 million jobs lost and nearly three million homes foreclosed on since the recession began has taken an even bigger toll on the number of American households.

[Sen.] Snowe recalls that when she proposed fiscally conservative “triggers” to limit Bush’s tax cuts in case of deficits, she was attacked by fellow Republicans. “I don’t know when willy-nilly tax cuts became the essence of who we are,” she says. “To the average American who’s struggling, we’re in some other stratosphere. We’re the party of Big Business and Big Oil and the rich.”