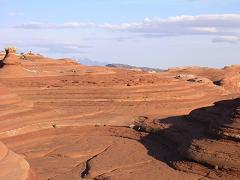 In the first days of the Bush regime, the National Security Council discussed invading Iraq around a map showing how its oil fields would be carved up, and Vice President Cheney held secret meetings with oil company executives to formulate the regime’s energy policy.x40x41 In its last days, still working for the fossil fuel industry, the Bush regime rushed to sell off oil and gas drilling rights to vast swaths of public lands in the redrock desert wilderness of Utah.x42 On the day of the auction, Tim DeChristopher, an economics student, finished his final exam at the University of Utah and headed to the Bureau of Land Management (BLM) office in Salt Lake City:x43

I saw some protesters walking back and forth outside, and I knew that I wanted to do more than that and that this kind of injustice demanded a higher level of disruption. And so, I just decided that I wanted to go inside and cause a bigger disruption.x44

DeChristopher went inside, and when someone asked him if he was there to bid, he said “yes”. He showed his driver’s license, signed a form and got an bidder’s paddle for the auction:

[O]nce I was in there, I realized that any kind of speech or disruption or something like that wasn’t going to be very effective, but I saw pretty quickly that I could have a pretty major impact on the way this worked. And it just took me a little bit of time to build up the courage to do that, knowing what the consequences would be. And so, I started bidding and started driving up the prices for some of the oil companies. And throughout that time, I knew that I could be doing more and could really set aside some acres to really be protected. And so, then I started winning bids and disrupting it as clearly as I could.

Eventually, the authorities caught on to DeChristopher’s game, and ushered him out:

The federal officials who took me into custody said that I cost the oil companies in the room hundreds of thousands of dollars and prevented 22,500 acres of land from being sold for fossil fuel development. I had a very open conversation with the federal agents about my motivations and values. They were friendly, respectful, and somewhat sympathetic.x45

The form DeChristopher had signed held a notice of the penalty for fraudulent bidding — up to five years prison.

News of DeChristopher’s action brought him much support from across the country. Patrick Shea, the BLM chief under President Clinton, became DeChristopher’s lawyer pro-bono, and via Bidder70.org, people sent in $45,000 for a down payment on the $1.7 million that DeChristopher owes.

I see that, you know, for all the problems that people can talk about in this country and for all the apathy and, you know, the eight years of oppression and the decades of eroding civil liberties, America is still very much the kind of place that when you stand up for what is right, you never stand alone.

Three days ago, the Bush wilderness sale hit another stumbling block in a federal court case brought by several environmental groups.x46 The judge ordered the administration not to cash any of the auction checks on the grounds that “development of domestic energy resources … is far outweighed by the public interest in avoiding irreparable damage to public lands and the environment”. Shea commented on that news:

The Temporary Restraining Order will be good evidence for Tim’s case, but he still has a separate criminal process to go through. … We are getting good cooperation from the Federal government in trying to resolve Tim’s case, we expect after Tuesday [inauguration day] the cooperation will increase.x46

I am a proud Southern Utah’n as well and I give Tim props and hope all goes well. The last think I want is people drilling for oil near my home. I know we have to eventually drill somewhere but I don’t want it to be in beautiful Southern Utah.