2007-12-07: I saw Comet Holmes again the night before last, one of the few clear nights during this cloudy late autumn near Erie’s southern shore. Being far enough from city lights to see the milk of the Milky Way, I could just make out the comet by naked eye. But through binoculars, I saw a striking, round smudge of light that seems about the size of the moon, but saw no sign of a tail. Comet Holmes is usually far too faint to see, but on October 24th, it underwent an outburst, and in a day became brighter than most of its neighboring stars in Perseus.x50 Since then, it has been growing and fading. Astronomer Edwin Holmes first found Comet Holmes when it underwent an outburst in November 1892. Two-and-a-half months later, it popped again. In its 16 trips around the sun since, it has stayed dark, until this year.x51 I did not hear about Comet Holmes until latter November, and missed it at its brightest. The comet now appears half-way along a line from the left-end of the “W” in Cassiopeia and the little diamond necklace that is the Pleiades. With binoculars and a view of Perseus, I think you could see it even from the city. And if it follows its behavior of a hundred years ago, Comet Holmes would brighten for us again in early January. 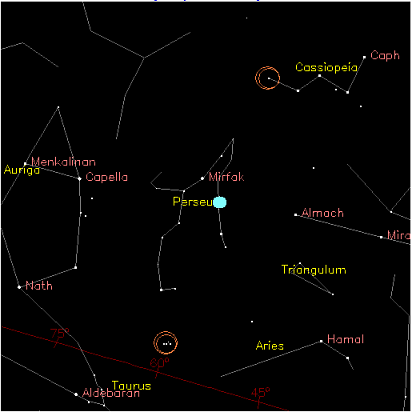 The blue disk marks Comet Holmes. The circles mark the left-end of the “W” and the Pleiades. The nearest bright star to the comet is Mirfak, the brightest in Perseus. map elements program by John Walker 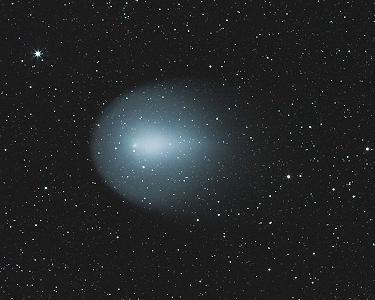