The citizens of Washington, D.C., planned a celebration for the United States’ 50th anniversary, and invited the living signers of the Declaration of Independence, among whom was its author, Thomas Jefferson. But he was too sick to attend, and sent his regret in a letter41:

It adds sensibly to the sufferings of sickness, to be deprived by it of a personal participation in the rejoicings of that day. But acquiescence is a duty, under circumstances not placed among those we are permitted to controul.

In the letter, Jefferson wrote of the meaning of July 4th:

… May it be to the world, what I believe it will be, (to some parts sooner, to others later, but finally to all,) the Signal of arousing men to burst the chains, under which monkish ignorance and superstition had persuaded them to bind themselves, and to assume the blessings & security of self-government. That form which we have substituted, restores the free right to the unbounded exercise of reason and freedom of opinion. All eyes are opened, or opening, to the rights of man. The general spread of the light of science has already laid open to every view the palpable truth, that the mass of mankind has not been born with saddles on their backs, nor a favored few booted and spurred, ready to ride them legitimately, by the grace of god. These are grounds of hope for others. For ourselves, let the annual return of this day forever refresh our recollections of these rights, and an undiminished devotion to them.

On the day of the celebration, July 4th, 1826, Thomas Jefferson died. His gravestone was chiseled according to the will he wrote out a few months earlier. The political offices he held – Virginia Governor, U.S. Secretary of State, Vice President, and President – found no room there42x43: 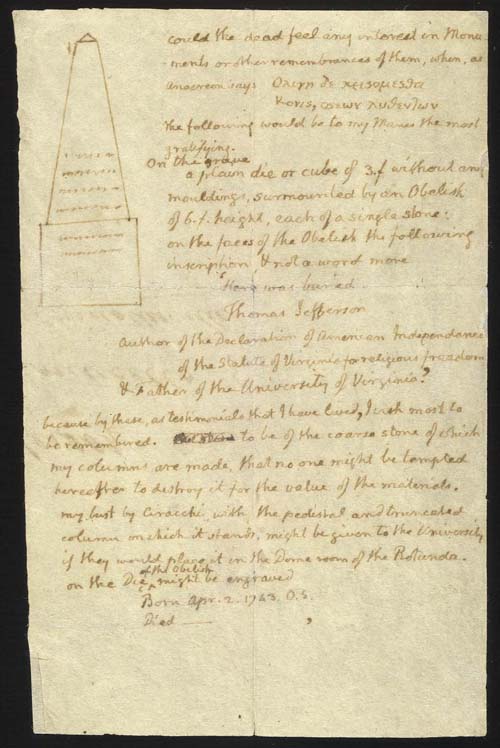 Jefferson’s Will – Library of Congress