Wind sweeps the North American High Plains, drying up the scant rain water30x31. But there is water enough for short grasses to flourish, and over the ages they have fed the hardy buffalo, whose massive herds “darkened the plains32“. “[The High Plains is] almost wholly unfit for cultivation,” wrote Major Stephen H. Long in 1819, while surveying the western U.S. territories35. Long drew a map and emblazoned the High Plains with the label – “The Great Desert33“. But hidden underground lay the Ogallala Aquifer, holding more water than Lake Huron, and spread over an area seven times the size34. The bulk of the aquifer’s water is ancient, having filled the Ogallala rock formation during the wetter climate at the end of the Ice Age35. The water, as is usual in aquifers, does not lie in a vast pool or river, but soaks the porous rock, and flows very slowly through it36. A drop of water that takes four days to cut across Kansas in the Arkansas River, would take thousands of years to cross that distance through the aquifer37. But the water drains fast enough down through the permeable rock towards a well bottom, where a pump can suck it up above ground in a stream. In the early 1900’s, the wind-powered pump allowed farmers to move to the High Plains, drill wells for drinking water, and grow crops during the wetter years of those decades38. Later, in the 1940’s, the electric pump allowed farmers to draw water faster, and to irrigate39. Since then, Americans, who had years ago slaughtered the buffalo and plowed under the grasses, have been draining the Ogallala40. With little rain and river water to recharge it, the water table of the Ogallala Aquifer has dropped more than 10 feet (3 meters) on the average, and 200 feet (60 meters) in some southern and central parts41x42. Faced with the cost of drilling and operating deeper wells to get the water, some High Plains farmers have switched acres to a native plant – the sunflower43. With its six-foot deep root, the sunflower, like its old prairie companion, the buffalo, can live well in high winds and on scant water44. 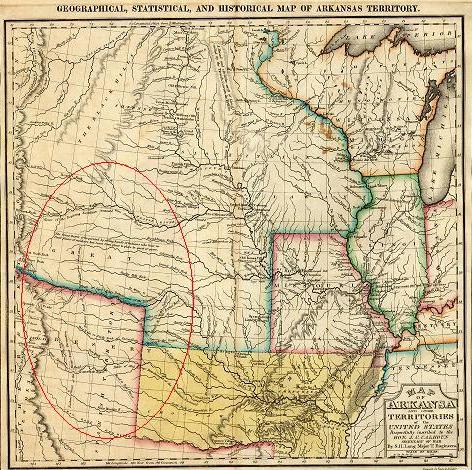 “The Great Desert is frequented by roving bands of Indians who have no fixed places of residence but roam from place to place in quest of game.” – Geographical, Statistical and Historical Map of Arkansas Territory by Major Stephen H. Long, Topographical Engineers from the Carey and Lea’s Atlas of 1822 / full map 3184×2703 pixels 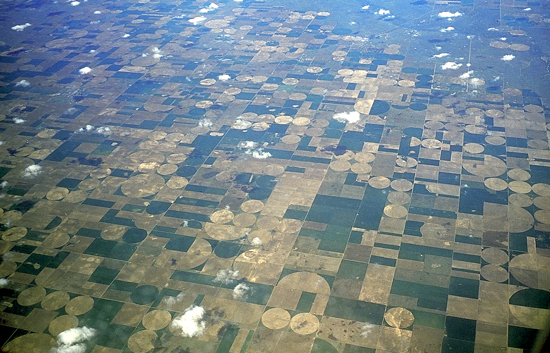 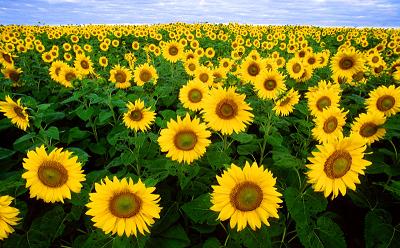 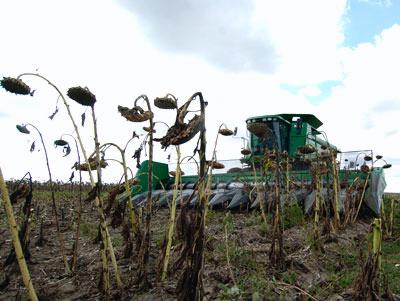 31 ‘Ogallala Aquifer’ – Wikipedia [en.wikipedia.org/wiki/Ogallala_Aquifer] “Much of the plains region is semi-arid with steady winds that hasten evaporation of surface water and precipitation.”

32 ‘American buffalo, (Bison bison)’ – U.S. Fish and Wildlife Service “Because the great herds were nearly gone before any organized attempts were made to survey populations, we may never know just how many buffalo once roamed North America, although estimates range from 30 to 75 million. “The moving multitude…darkened the whole plains,” wrote Lewis and Clark, who encountered a herd at South Dakota’s White River in 1806.”

33 ‘Geographical, Statistical and Historical Map of Arkansas Territory by Major Stephen H. Long, Topographical Engineers from the Carey and Lea’s Atlas of 1822′ – The University of Tulsa

The Long map became a “master map,” to be built upon and added to by a generation of cartographers …

The delineation of the area as a desert, unsuitable for sustainable agriculture such as was known to Long, a man from New Hampshire, illustrates how the expectations Americans had for the West were turned upside-down when confronted with its realities. The western Plains were not the farmer’s garden or paradise as imagined by Thomas Jefferson; the area was exceedingly arid with unbroken grasslands compared to the wet, green and timbered east.

34 ‘High noon at the Ogallala aquifer’ by Jacques Leslie, Salon.com
“One of the largest underground repositories of water in the world, the Ogallala stretches from Texas to South Dakota and once held more water than Lake Huron. That was a century ago, before the advent of cheap electric pumps gave farmers the power to lift water hundreds of feet”

… Approximately 170,000 wells draw water from the aquifer that has brought prosperity to an area described by Major Stephen Long in 1819 as “almost wholly unfit for cultivation and . . . uninhabited by people depending upon agriculture for their subsistence.” The aquifer covers an area of 480,000 square kilometers, making it the largest area of irrigation-sustained cropland in the world.

… the aquifer contains “fossil” water, the product of a wetter ancient climate associated with the end of the last ice age. There is no sufficient contemporary source for water to recharge the whole aquifer although substantial recharge does occur in some areas from streams (e.g. Platte River, Nebraska) and from irrigation projects supplied with surface waters.

A common misconception is that groundwater exists in underground rivers (e.g. caves where water flows freely underground). This is only sometimes true in eroded limestone areas known as karst topography which make up only a small percentage of Earth’s area. More usual is that the pore spaces of rocks in the subsurface are simply saturated with water — like a kitchen sponge — which can be pumped out …

The beach provides a model to help visualize an actual aquifer. If a hole is dug into the sand, very wet or saturated sand will be located at a shallow depth. This hole is a crude well, the wet sand represents an aquifer, and the level to which the water rises in this hole represents the water table.

… the velocity of water that moves through the aquifer is estimated to average about 1 foot per day.” [At that rate, to go 400 miles, as does the Arkansas River through Kansas, would take 5786 years.]

38 ‘GROUND WATER FOR HOUSEHOLD WATER SUPPLY IN RURAL AMERICA: PRIVATE WELLS OR PUBLIC SYSTEMS?’ – Andrew W. Stone, American Ground Water Trust, Concord, NH 03301, USA [www.agwt.org/Education_Papers/RuralWaterInUSA.pdf] “The evolution of drilling technology in the late 1870s was important for opening up much of the Midwest and High Plains, especially in those areas where few rivers were perennial. … Once drilling machines, and wind powered pumps became economically available, settlement patterns were changed by the almost ubiquitous availability of ground water for domestic water use.”

Cheap deep drilling for water wells became available only in the 1930s, and powerful submerged electric pumps were invented just as the government provided Federally subsidized installation of electric power on farms all across the Plains. As the United States came out of the Depression years into a highly stimulated wartime economy, farmers were encouraged by cheap loans and strong crop prices to maximize production. Deep drilling and irrigation with Ogallala water became economic options for the first time, but the generally wet years of the 1940s did not require much additional water for irrigation. Some innovative farmers were rewarded for their enterprise by bumper crops, but for many others the natural rainfall gave a good return.

Ogallala water allowed the agricultural transformation of the High Plains in the 1950s. Renewed drought led to major well drilling, especially on the Texas High Plains. With the technology now well established, the water pumped and the acreage irrigated increased dramatically. …

… Approximately 90 percent of the water pumped from the Ogallala Aquifer is used for irrigation. Precipitation and surface streams replenish the aquifer, but surface streams in the arid High Plains are sparse and many are ephemeral, wet only at certain times of the year. Because of the heavy demand for water and the slow replenishment rate, the average water level of the aquifer declined nearly 3 m between 1940 and 1980, then another 30 cm in the 1980s. Better water management and new technologies have helped to slow this depletion. However, greater efforts will be needed to ensure that the water levels in the aquifer stabilize.

In terms of measured declines in the water table, a 10-foot (3-m) decline has been common across much of western Kansas. The much greater declines – in some cases the water table is now 200 feet (60 m) below its level prior to irrigation – are mostly centered in southwestern and west-central Kansas, where irrigation development has been greatest and the amount of water in the aquifer [in Kansas] has been greatest.

Sunflower has an extensive root system that is capable of using large amounts of available soil water from deep in the soil profile. In a detailed study of sunflower root development and soil water use in Kansas, researchers found 87 to 96 percent of observed roots in the sampled soil profile were above 65 inches, although some roots were found as deep as 106 inches.

What happens when (if) ethanol becomes the fuel of the future?
Will the country rush to cultivate more land that depends on the Ogallala for water?
Has anyone considered that?

Good point – I can see where higher priced bio-fuel corn could lead to deeper pumping. Another drawback to bio-fuel is that it could lead to taking more rainforest.

Response To Willam Allen, and everyone, he asked “What happens when (if) ethanol becomes the fuel of the future?
Will the country rush to cultivate more land that depends on the Ogallala for water?
Has anyone considered that?”
Yes, many people considered, studied, surveyed, calculated graphed and concluded about it.Don’t you remember paying for it? We all paid the USGA, I clicked the link above. those pages cost millions, so we could examine them. And then, make informed DECISIONS. TOO BAD THEY ARE IGNORED BY OUR LEADERSHIP, who ORDERED them, TAXED, and APPROIATED OUR money to begin with. And agorantly proceed and APPROIATE again, to take US, IN MASS the wrong way with IMPUNITY and IGNORANCE.

Ps go to see what predictions are made at nine clean technology predictions for 2009. by Cleantech group. As much as it pains me, after reading that, a safe bet would be to invest in drill bit EXTENSIONS.

In recent weeks a lot of the country served by the Ogallala aquifer has had heavy rains with flooding, has this helped to recharge the aquifer?

with all the flood waters going up the red river and down the minnesota, why not build a underwater drain into the ogallala to stop flooding and restore water levels,

Interesting idea. River water helps recharge the aquifer, but since the water is mostly held in porous rock, I think it’s more a matter of seeping than pouring in.

The idea is to harness fresh water runoff from Alaska and Canada (Yukon and MaKenzie Rivers) and divert it south through a series of pumps, lifts, aquifers, dams, etc., to include Nuclear Power plants, and to therefore build the biggest “project” in Human history!

It’s awesome! To see it in all it’s glory, go to larouchepac.com, and search for NAWAPA, or click on ‘NAWAPA XII”

to continue: or got to NAWAPA XXII on larouchepac.com, or, go to You Tube, and simply search for NAWAPA!

CORRECTION: NAWAPA XXi. NAWAPA is the BIGGEST PROJECT IN HISTORY! It is the way to lift the nation out of depression, collapse, and despair, and to give the young generation a real future.

I’m all for bringing back Glass-Steagall and government investment in infrastructure, but I think NAWAPA is too much risk with so many dollars, and could have huge and unforeseen ill environmental effects.

The LaRouche site gives a good explanation of the proposal. Here is some more background on this idea: “The Rip Van Winkle of Water Projects – NAWAPA Remerges after a 50 Year Slumber”

I hypothesize that the mid-west aquifer is draining the Great Lakes. For several years, before the current drought, the level were dropping and no one could explain why.
With the mid-west aquifer being sucked dry, could it be that the water in the Great Lakes, especially Superior, is migrating to the aquifers.
Does anyone have any information on this?