Last week astronomers published the discovery of something never seen before – a double helix nebula, which they found near the center of the Milky Way1. Astronomers took a picture of the nebula (shown below) using the Spitzer infrared space telescope, one of NASA‘s four “great observatories”, each of which detects a different radiation band2. The picture covers about 80 light years of the nebula’s length and shows the two intertwined strands of space dust and gas forming the double helix, which is also the shape of DNA molecules. The report’s lead astronomer thinks that a magnetic field sent out vertically from the large disk of gas circling the galaxy’s central black hole has shaped the nebula. The nebula lies about 300 light years from the central black hole. By comparison, the Earth lies more than 25,000 light years from the central black hole. Unlike visible light, infrared rays beam clearly past the dense dust at the galaxy’s center to reach our space telescope3. 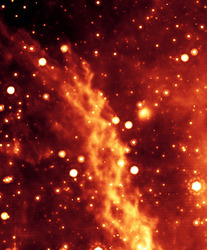 The double helix nebula. (The image uses false colors because the eye is not sensitive to infrared light.) The spots are infrared-luminous stars, mostly red giants and red supergiants. Many other stars are present in this region, but are too dim to appear even in this sensitive infrared image. Credit: NASA/JPL-Caltech/UCLA

Spitzer is quite difficult or impossible to replicate with ground telescopes, and had few orbiting predecessors. Spitzer was not an order of magnitude larger than its latest predecessor, ISO (the Infrared Space Observatory). However, Spitzer’s instruments took advantage of the rapid advances in infrared detector technology at the time. Combined with its slightly larger aperture, favorable fields of view, and longer life, science return will be unprecedented. Infrared observations are useful for cool objects which do not emit much visible light, or objects obscured by dust at visible light wavelengths.

The ability of Spitzer to see though dust and thick gases is good for galactic nuclei observations. Massive objects at the hearts of galaxies shine in X-rays, gamma rays, and radio waves, but infrared studies into these clouded regions can reveal the number and positions of objects.

4 ‘The Double Helix Nebula: a magnetic torsional wave propagating out of the Galactic centre’ – Mark Morris, Keven Uchida, and Tuan Do

Radioastronomical studies have indicated that the magnetic field in the central few hundred parsecs of our Milky Way Galaxy has a dipolar geometry and a strength substantially larger than elsewhere in the Galaxy, with estimates ranging up to a milligauss. A strong, large-scale magnetic field can affect the Galactic orbits of molecular clouds by exerting a drag on them, it can inhibit star formation, and it can guide a wind of cosmic rays away from the central region, so a characterization of the magnetic field at the Galactic center is important for understanding much of the activity there. Here, we report Spitzer Space Telescope observations of an unprecedented infrared nebula having the morphology of an intertwined double helix. This feature is located about 100 pc from the Galaxy’s dynamical centre toward positive Galactic latitude, and its axis is oriented perpendicular to the Galactic plane. The observed segment is about 25 pc in length, and contains about 1.25 full turns of each of the two continuous, helically wound strands. We interpret this feature as a torsional Alfven wave propagating vertically away from the Galactic disk, driven by rotation of the magnetized circumnuclear gas disk. As such, it offers a new morphological probe of the Galactic center magnetic field. The direct connection between the circumnuclear disk and the double helix is ambiguous, but the MSX images show a possible meandering channel that warrants further investigation.

The common template for all life forms on earth seen in the infrared spectrum by Spitzer telescope.

One can’t help but wonder if our own DNA is formed by magnetic fields from the nearest black hole in the Milky Way Galaxy?

As yet no one knows how our 4 replicating DNA nucleotides form space particles into the astronomically complex single cell which differentiates into a living conscious human being. Now Mr. Morris wonders if it could be a very strong magnetic field from a black hole some 300 light years from this mass of gas and dust which resembles the template of life forms.

It must be that Mr. Morris is smoking something very strong to come to conclusions which are more in the metaphysical arena.