During the Cold War the operations division (DO) of the CIA overthrew elected governments and supported brutal dictators, but the analytic division (DI) maintained a reputation for producing objective reports, such as those debunking President Kennedy’s “missile gap” rhetoric and President Lyndon Johnson’s assumption that bombing in Viet Nam would be effective1.

President Reagan used Team B reports to support increased military spending that cost the country hundreds of billions of dollars, and to support “death squad” governments in Central America against peasant uprisings. “The CIA’s objectivity on the Soviet Union ended abruptly in 1981, when Casey became the DCI [director of central intelligence]”, wrote former CIA senior analyst Melvyn Goodman3. Casey put Robert Gates in charge of the DI, and Gates pushed in his own managers, who CIA analysts dubbed “Gates clones2.” Gates got a false report out that the KGB (Soviet secret police) was behind the attempted assassination of the Pope by a neo-fascist from Turkey. While the government of Pakistan was aiding Reagan’s campaign to undermine the Soviet-backed government in Afghanistan, the CIA assessment that Pakistan was developing an atomic bomb was squelched. Pakistan went on to develop the bomb, escalating the arms race in South Asia and providing the opportunity for Islamic extremists to gain control of nuclear weapons.

During Gates’ confirmation hearings to become President George H. W. Bush’s CIA director, CIA analysts led by Goodman warned of the agency’s politicization, but George Tenet, aide to Senate Intelligence Committee chairman David Boren (D-OK), maneuvered behind the scenes to limit investigation of Gates and usher him in. The collapse of the Soviet Union proved Team B reports ludicrous and bore out original CIA analysis.

Former CIA analyst Peter Dickson, who was labeled psychologically unfit when he refused to back off on his report noting Soviet nuclear restraint, urged President Clinton to clean house at the CIA. But Clinton did not heed the advice, and appointed a neo-conservative Democrat, James Woolsey, as CIA director. The politicization of the CIA was set in stone as Clinton’s last CIA director, Tenet, happily presided over the naming of the agency’s headquarters after George H. W. Bush.

The installation of George W. Bush as president brought Cheney, Rumsfeld, Wolfowitz and Libby powerful policy posts. They used slanted, incorrect CIA reports on Iraqi weapons of mass destruction (WMD‘s), as well as false reports from separate political intelligence shops, to sell the invasion of Iraq5. When Secretary of State Colin Powell presented false claims of Iraqi WMD‘s to the UN, George Tenet, still director of the politicized CIA, sat right behind him6. 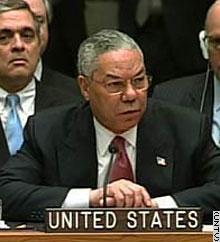 ‘Intelligence, Policy, and the War in Iraq’ by Paul Pillar, Foreign Affairs, March/April 2006 ‘Summary: During the run-up to the invasion of Iraq, writes the intelligence community’s former senior analyst for the Middle East, the Bush administration disregarded the community’s expertise, politicized the intelligence process, and selected unrepresentative raw intelligence to make its public case.’

2 ‘The CIA‘s DI Disgrace’ By Robert Parry July 13, 2004 ‘Gates soon was salting the analytical division with his allies, a group of managers who became known as the “Gates clones.”’

6 ‘Intelligence, Policy, and the War in Iraq’ by Paul Pillar, Foreign Affairs, March/April 2006 ‘Another problem is that on Iraq, the intelligence community was pulled over the line into policy advocacy — not so much by what it said as by its conspicuous role in the administration’s public case for war. This was especially true when the intelligence community was made highly visible (with the director of central intelligence literally in the camera frame) in an intelligence-laden presentation by Secretary of State Colin Powell to the UN Security Council a month before the war began. ‘