The Nuremberg trials for massive crimes committed during World War II led to the opening of the permanent International Criminal Court (ICC) over fifty years later1. The first trial aimed to hold to account German Nazi leaders, who started the western part of the war, which killed three percent of the world’s people2. Ten million were killed in the Nazis’ mass-murder program of acts from street shootings to extermination camp gassings3. Rejecting a proposal to immediately execute the leaders4, France, the United Kingdom, the United States and the Soviet Union, formed a tribunal to try 22 men, each for some or all of four charges: conspiracy to wage aggressive war, waging aggressive war, war crimes, and crimes against humanity5. The American judge, Robert Jackson, took a leave from the US Supreme Court to lead the tribunal6. He aimed for a fair trial, saying at the opening, “We must never forget that the record on which we judge these defendants today is the record on which history will judge us tomorrow. To pass these defendants a poisoned chalice is to put it to our own lips as well7.” Some defendants plead ignorance of atrocities. For example, Hans Frank governed occupied Poland, but claimed he did not know of the extermination camps built and operated under his administration8. He changed his story when the prosecution presented his diaries, which showed that he knowingly and willingly participated. In his summation Jackson said, “The defendants meet this overwhelming case, some by admitting a limited responsibility, some by putting the blame on others, and some by taking the position in effect that while there have been enormous crimes there are no criminals9.” Twelve defendants, including Frank, got a death sentence, three got life in prison, four got other long prison terms and three were acquitted. The newly-formed United Nations recognized the need for a permanent court to prosecute mass murderers and war criminals, and the ICC finally opened in The Hague in 200310. 100 countries, including France and the UK, have joined the ICC so far11. Another 44 have signed, but have not yet ratified the statute. US membership has been delayed by its current administraton, which withdrew the country’s signature12. The ICC now has three investigations open13, including the case of the Darfur region of Sudan, where massacres and the displacement of nearly two million people from their homes have occurred14.

The Palace of Justice in Nuremberg, Germany 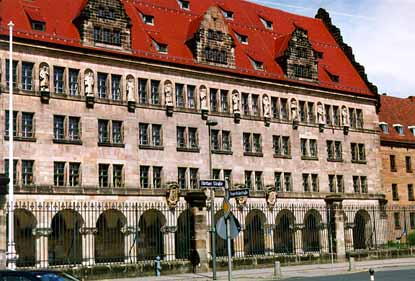 The International Criminal Court in The Hague, Netherlands 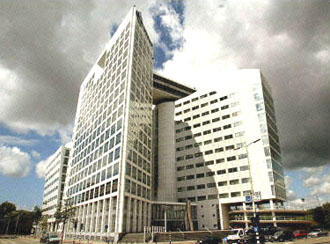 1 ‘Nuremberg Trials’ – Wikipedia “The Nuremberg trials initiated a movement for the prompt establishment of a permanent international criminal court, eventually leading over fifty years later to the adoption of the Statute of the International Criminal Court.
The Conclusions of the Nuremberg trials served to help draft:

2 ‘World War II’ – Wikipedia “World War II resulted in the direct or indirect death of anywhere from 50 to 60 million people, over 3% of the world population at that time.”

3 ‘The Holocaust’ – Wikipedia “Early elements of the Holocaust include the Kristallnacht pogrom and the T-4 Euthanasia Program, progressing to the later use of killing squads and extermination camps in a massive and centrally-organized effort to murder every possible member of the populations targeted by the Nazis.” “Estimates place the total number of Holocaust victims at up to 26 million people, although the number 9 to 11 million is usually held as more reliable.”

5 ‘Nuremberg Trials’ – Wikipedia “The indictments were for:

6 ‘Robert Jackson’s Place in History: Nuremberg Revisited’ – REMARKS OF HENRY T. KING, JR., Chautauqua, New York, June 13, 2003 “The day after Roosevelt’s death, Robert H. Jackson, then a Supreme Court Justice, pronounced his support for Stimson’s proposal. Jackson advocated that Nazi leaders be tried, but that they be subject to a fair trial.” “ The endorsement by so respected an authority had tremendous influence on Judge Samuel Rosenman, an advisor to Presidents Roosevelt and Harry Truman on the subject of legal recourse against Nazi aggressors. Rosenman’s acceptance of Jackson’s position went beyond merely heeding his calls for a trial. On May 2, 1945, at Rosenman’s recommendation, President Truman appointed Jackson to be the United States Chief Counsel for redressing Nazi crimes.”

7 The Trial of German Major War Criminals Sitting at Nuremberg, Germany – Second Day: Wednesday, 21st November, 1945 Robert H. Jackson: “The former high station of these defendants, the notoriety of their acts, and the adaptability of their conduct to provoke retaliation make it hard to distinguish between the demand for a just and measured retribution, and the unthinking cry for vengeance which arises from the anguish of war. It is our task, so far as is humanly possible, to draw the line between the two. We must never forget that the record on which we judge these defendants today is the record on which history will judge us tomorrow. To pass these defendants a poisoned chalice is to put it to our lips as well. We must summon such detachment and intellectual integrity to our task that this trial will commend itself to posterity as fulfilling humanity’s aspirations to do justice.”

8 ‘THE NUREMBERG TRIALS: THE DEFENDANTS AND VERDICTS‘ by Ben S. Austin “He served as Governor of the Generalgouvernment of Poland from 1939 to the end of the war. Under his administration the approximately 2.5 million Jews in the occupied territories of Poland were exploited in slave labor. Also during his administration, the extermination camps in eastern Poland were constructed implemented. In the initial stages of his testimony, Frank denied knowing anything about Auschwitz or Maidanek, even though Auschwitz was only 30 miles from Cracow, the seat of his administrative offices. However, when the thirty-six volumes of his journal were brought into the courtroom on October 8, Frank’s testimony shifted from denial of knowledge to denial of responsibility and finally to open condemnation of Hitler, acceptance of guilt and pleas for mercy. His confession, however, according to Telford Taylor, was a civic confession rather than an individual one.”

10 ‘Nuremberg Trials’ – Wikipedia “The court became operational when the signatory nations met in the Assembly of State Parties to appoint a prosecutor and 18 judges. It opened on March 11, 2003.”

12 ‘US Withdrawal from ICC Undermines Decades of American Leadership in International Justice’ by Justice Richard J. Goldstone, International Criminal Court MONITOR, June 2002 ‘On 6 May 2002, in an act which shocked governments around the world, the United States formally renounced its signature of the Rome Statute of the ICC, authorized on 31 December 2000 under former President Bill Clinton. Speaking on behalf of the Bush Administration, Under Secretary for Political Affairs Marc Grossman described the Rome Statute as a “flawed outcome,” built on a “flawed foundation.”’

14 “‘Report of the International Commission of Inquiry on Darfur
to the United Nations Secretary-General’ paragraph 186″:http://www.icc-cpi.int/library/cases/Report_to_UN_on_Darfur.pdf “186. There are consistent accounts of a recurrent pattern of attacks on villages and settlements, sometimes involving aerial attacks by helicopter gunships or fixed-wing aircraft (Antonov and MIG), including bombing and strafing with automatic weapons. However, a majority of the attacks reported are ground assaults by the military, the Janjaweed, or a combination of the two. Hundreds of incidents have been reported involving the killing of civilians, massacres, summary executions, rape and other forms of sexual violence, torture, abduction, looting of property and livestock, as well as deliberate destruction and torching of villages. These incidents have resulted in the massive displacement of large parts of the civilian population within Darfur as well as to neighbouring Chad. The reports indicate that the intensity of the attacks and the atrocities committed in any one village spread such a level of fear that populations from surrounding villages that escaped such attacks also fled to areas of relative security.”