Mainstream science holds that the burning of fossil fuels is causing the earth to warm rapidly. A scientist published that idea in 18981, and through accelerated study it became a consensus by 19962. Only a few scientists still hold that current global warming is due to a natural cause17, but their voices have been amplified by an oil industry propaganda campaign3x16 and ExxonMobil-funded policy groups4 through the big media outlets5. The earth is naturally warmed by the greenhouse effect6. Gases such as methane and carbon dioxide (CO2) act like the glass roof of a greenhouse, letting sun rays through to strike the earth’s surface and trapping the resulting heat. Burning of fossil fuels releases the carbon in the fuel as CO2, putting more in the atmosphere to trap more heat7. Thermometer readings from the past 120 years show an accelerating rise of average world-wide temperature13. Study of ice cores, tree rings and coral gives us indication of temperature for the time before widespread thermometer use. Scientists have pulled ice cores from Greenland and Antarctica that have layers of ice formed as long ago as 220,000 years14. They have analyzed the layers to get the proportion of CO2 and the temperature, which is indicated by a ratio of oxygen isotopes9. Scientists found that the relationship between higher CO2 and methane content and higher temperature holds throughout the millennia10. They found no warmer time in the past millennium than the present, and throughout all time studied found no period like the present, with its global spike in temperature and no natural explanation11. Further evidence, such as a longer and better temperature record, has made the scientific consensus today stronger than ever15x12. 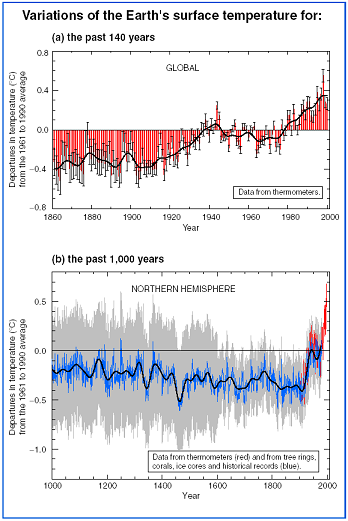 1 ‘The Discovery of Global Warming’ by Spencer Weart “In 1896 a Swedish scientist published a new idea. As humanity burned fossil fuels such as coal, which added carbon dioxide gas to the Earth’s atmosphere, we would raise the planet’s average temperature. This “greenhouse effect” was only one of many speculations about climate, and not the most plausible. Scientists found good reason to believe that our emissions could not change the climate. Anyway major change seemed impossible except over tens of thousands of years.”

3 ‘Some Like It Hot’ by Chris Mooney “Victory will be achieved when recognition of uncertainty becomes part of the ‘conventional wisdom’.” – American Petroleum Institute

4 ‘Some Like It Hot’ by Chris Mooney “… these [free-market, antiregulatory] groups are funded by ExxonMobil, the world’s largest oil company.”

5 ‘Contrarians’ by Stephen H. Schneider “… these contrarians are given disproportionate representation in the media (see Mediarology) and by certain governments, especially the Bush Administration, so far …”

6 ‘A.1 The IPCC and its Working Groups; Box 1: What drives changes in climate?’ – IPCC “The Earth absorbs radiation from the Sun, mainly at the surface. This energy is then redistributed by the atmospheric and oceanic circulations and radiated back to space at longer (infrared) wavelengths. For the annual mean and for the Earth as a whole, the incoming solar radiation energy is balanced approximately by the outgoing terrestrial radiation. Any factor that alters the radiation received from the Sun or lost to space, or that alters the redistribution of energy within the atmosphere and between the atmosphere, land, and ocean, can affect climate.”

7 ‘C.1 Observed Changes in Globally Well-Mixed Greenhouse Gas Concentrations and Radiative Forcing’ – IPCC “the observed increase in CO2 is predominately due to the oxidation of organic carbon by fossil-fuel combustion and deforestation” … “Most of the emissions during the past 20 years are due to fossil fuel burning, the rest (10 to 30%) is predominantly due to land-use change, especially deforestation.”

11 ‘Paleoclimatic Data Before 1000 Years Ago’ – NOAA “The latest peer-reviewed paleoclimatic studies appear to confirm that the global warmth of the 20th century may not necessarily be the warmest time in Earth’s history, what is unique is that the warmth is global and cannot be explained by natural forcing mechanisms”

12 ‘The truth about global warming’ By Sandi Doughton, Seattle Times staff “With each passing year the evidence [that greenhouse gases are altering the world’s climate] has gotten stronger — and is getting stronger still.”

14 ‘Deciphering Mysteries of Past Climate From Antarctic Ice Core’ by Vostok Project Members “The chronology of the ice at Vostok has been established down to 2546 m, which is dated at 220,000 years before present.”

15 ‘C.1 Observed Changes in Globally Well-Mixed Greenhouse Gas Concentrations and Radiative Forcing’ – IPCC “There is new and stronger evidence that most of the warming observed over the last 50 years is attributable to human activities.” – Third Assessment Report, 2001

16 ‘Hot and Bothered: An Interview with Ross Gelbspan’ Interviewed By Dave Gilson, April 18, 2005 “… the purpose of this publicity campaign using greenhouse skeptics was to reposition global warming as theory rather than fact.”

That data may be correct but if you look at that data in comparison with the warming and cooling in the whole life of the earth and not just the past 1000 years you will see that data contradicts these graphs.

I don’t think so. “See There’s No Warm Time Like the Present”:http://theparagraph.com/2009/12/theres-no-warm-time-like-the-present/

With all of the studies done on global warming, especially being caused by fossil fuels should be a huge clue to the powers that be that we need to develop future energy platforms that will reduce and eventually replace the need for fossil fuels. A win-win situation and the end to $4 or more per gallon gasoline.

I’m not concerned too much about the accuracy of the facts and statistics. We all know global warming is happening and we are already feeling the effects. Hopefully, scientist are being proactive on this issue and even more efforts are being put into how to delay or even reverse its effects.

Allison i don’t the effects can be reversed hopefully delayed.

First, the immigration… now, this.