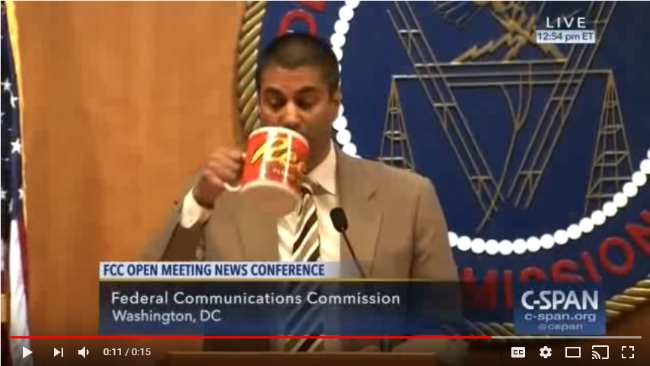 Judging by his big Reese’s mug, Federal Communications Commission (FCC) Chairman Ajit Pai seems to like, as do many, chocolate, peanut butter and coffee. But, he seems to hate, as do only a very few, internet freedom. In 2015, the FCC issued an order, which secured that freedom. The order changed the classification of internet service providers (ISPs) from information services to telecommunications services. As a telecommunications service, an ISP must not interfere with the content a person chooses to receive or send. That ISP must follow FCC net neutrality rules to not throttle or block lawful data based on its origin or content. When Donald Trump got elected, a Republican majority on the FCC became inevitable. Shortly after, Pai gave a speech, and recounted how, on the day the FCC issued its order to secure net neutrality, he said that he believed “its days are numbered.” He said, “Today, I am more confident than ever that this prediction will come true.” And, as it has unfolded, Pai himself has become FCC Chairman, and is leading the charge to snuff net neutrality.

But, as a commissioner since 2012, Pai must know that net neutrality is very popular. And he would know that millions of internet denizens posted four million comments to urge the commission to secure net neutrality. Not long after, the FCC issued its order to do so. In cutting against that popularity, Pai has been less than forthright, and has used tricks in getting to his goal. Let’s look at some of Pai’s tricks.

Pai has titled his order to snuff net neutrality “Restoring Internet Freedom.” But that order would practically allow the ISP total control over ones internet data flow. So, the order would be rightly titled, “Destroying Internet Freedom.” However, the original title does seem to set the tone for all the other doublespeak in Pai’s order. To help decypher it, Commissioner Mignon Clyburn posted a fact sheet containing a glossary:

Pai’s order claims to just “return to the light-touch framework under which a free and open Internet underwent rapid and unprecedented growth for almost two decades.” Yes, the internet has been largely free and open, and undergone rapid growth — actually, for more than two decades now. But that was not, as Pai would have you believe, due to a lack of net neutrality rules. In fact, the creators of the internet built it with an open, neutral architecture. Also, the internet inherited the policy of neutral treatment of communications from the telephone system, where the internet boomed in the old dial-up days. And when, in the earlier 2000’s, the FCC first classified ISPs as information services, it still drew up and enforced open internet rules, along the lines of net neutrality. When ISPs challenged those rules, the court struck them down, saying that the FCC could not make such rules for information services, but could for telecommunications services. In 2015, after an outcry from millions, the FCC at last classified the ISPs as telecommunications services, made bright-line net neutrality rules, and so secured internet freedom. Also, Pai would have you believe that his order returns regulation and enforcement to the type done by the FCC before 2015. Actually, Pai’s order totally — and maybe illegally — abandons the FCC’s duty. As Harold Feld of Public Knowledge wrote:

For almost 20 years, both Republican and Democratic Chairmen of the FCC have asserted the FCC’s ongoing responsibility and authority to protect consumers and promote competition in the broadband access market. Rather than admit that this draft Order is a radical break from a bipartisan consensus on FCC authority to protect consumers generally and net neutrality specifically, Chairman Pai prefers to surrender this power to broadband providers, enabling them to set their own ‘net neutrality’ standards.

One way the people won net neutrality and internet freedom was by sending millions of comments to the FCC in support of it. When Pai issued his rule-making order to kill net neutrality, millions again rose to comment. The crush of comments seemed to bring down the FCC’s web site. But the FCC claimed the outage was due to a distributed denial of service (DDOS) attack. Since then, reporters and senators have asked the FCC for evidence of the DDOS, but the agency has not produced any whatsoever. And in response to a Freedom of Information Act (FOIA) request, the FCC produced only a laundry list of dubious excuses — such as protecting trade secrets — for not giving out the data. A reporter has now sued the FCC for violating the FOIA.

At any rate, 22 million comments were filed. Of those in favor of Pai’s net neutrality repeal, a great many were bot-produced and fraudulent. The fraudulent comments had signatures of fake or dead persons, or real persons who did not sign. While Pai may not have helped produce the comment fraud, neither has he helped get to the bottom of it. New York Attorney General Eric Schneiderman has been investigating the massive comment fraud, but the FCC has ignored his requests for information.

The FCC formally published Pai’s order on November 22 — the day before Thanksgiving — and scheduled a vote on it for December 14. The release of the order was clearly timed for the Thanksgiving holiday, when people would be busy with family and travel, and less likely to see the news. But Commissioner Jessica Rosenworcel, who, like Commissioner Clyburn, favors net neutrality, wants people to be well aware, and calls for public hearings before any change of the rules. She also urges people to again rise up and fight for their internet freedom:

Before my fellow FCC members vote to dismantle net neutrality, they need to get out from behind their desks and computers and speak to the public directly. The FCC needs to hold hearings around the country to get a better sense of how the public feels about the proposal.

When they do this, they will likely find that, outside of a cadre of high-paid lobbyists and lawyers in Washington, there isn’t a constituency that likes this proposal. In fact, the FCC will probably discover that they have angered the public and caused them to question just whom the agency works for.

I think the FCC needs to work for the public, and therefore that this proposal needs to be slowed down and eventually stopped. In the time before the agency votes, anyone who agrees should do something old-fashioned: Make a ruckus.

Reach out to the rest of the FCC now. Tell them they can’t take away internet openness without a fight.

must not interfere “Dear FCC: We See Through Your Plan to Roll Back Real Net Neutrality” COMMENTARY BY CORYNNE MCSHERRY, Electronic Frontier Foundation; MAY 18, 2017

very popular “How We Won” – Battle for the Net

22 million comments were filed“Investigation of fake net neutrality foes has been stymied by the FCC, N.Y. attorney general says” – The Washington Post; November 22, 2017

less likely to see “The U.S. government is using Thanksgiving to hide its plans to destroy net neutrality” BY JASON ABBRUZZESE, Mashable; NOV 17, 2017

urges people “Op-Ed I’m on the FCC. Please stop us from killing net neutrality” by Jessica Rosenworcel; in The Los Angeles Times; Nov 22, 2017