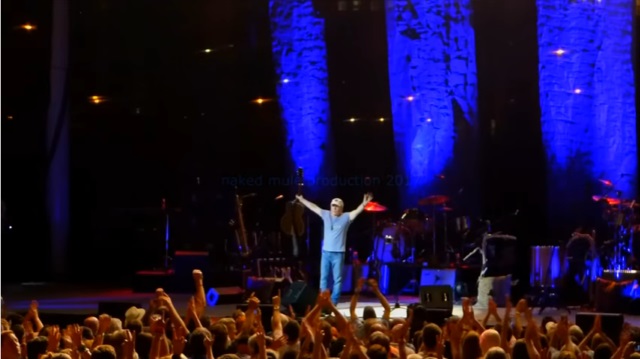 In a concert at the riverside pavilion in Cleveland last week, Paul Simon gave the crowd a tour-de-force — and a sermonette.

The tour-de-force was made up of a strong choice of songs from Simon’s 53-year-long career. Five Simon and Garfunkel songs, five songs from the lush “Graceland” album, a couple from last year’s “Stranger to Stranger,” and 13 more carried the crowd through a 2 hour and 10 minute musical trip. Throughout, Simon hit the right notes, while his band put out striking strong rhythms and soaring psychedelic sounds.

The sermonette came just before the last song:

I feel a little bit funny about saying these things, but I’m giving, I’m allowing myself the privilege of it due to my advanced age. For years it is my observation: Anger is addictive. And we are becoming a nation of addicts. Ask yourself, “Who are the dealers? Who are the pushers? Where, where is that anger coming from?” And be aware of — when you hear it, when you see it — be aware of its source. It’s not, it’s not that we aren’t gonna have reasons to be angry. Of course we do. But decision-making and best choices are made with a cool and a calm mind. And in a well-knit community, practice kindness.

Then he played, in acoustic solo, “The Sound of Silence.”

Here is the set list from the Paul Simon concert at Nautica in Cleveland, 13 June 2017:

protected in nature preserves Half-Earth Project – What We Do